I have 3 days of prime emotional anethesization to work through before I get on this creaky jetplane to New York,

our relationship going as extinct as ever. Black ass spotted rhino girl. Long dead brown dodo in a tripwire display case next to an army of Precious Moments figurines desiring colorblindness.

My sweet fireballing partyhead of wino dehydration: now I spank myself the next day in a school marm self-hate effort to revive by flagellation, which is partly the anxiety of a million Rip Van Winkle moments inherited from my Black absentee father who left, who continues to leave me daily,

discarded in the care of a white German grandmother who was married by age 17 washing my  mouth out with Dawn & Palmolive in the heartlands, where the weapons that murder us are auctioned in a private sale that maybe Whoopi Goldberg will address on The View.

It’s not complicated: I drink to forget how ugly you make me feel seeing that it’s impossible to feel good for long in the land of the alabaster free. Very quickly someone will neutralize this national conversation & say how we are all complicit in our own ugliness, despite the fact that most of the

time representation is just competition. How it’s easy for artists & writers to get aesthetics &  influences confused & we often end up performing free marketing work for the globally loved & protected. Whatever happened to PM Dawn? I asked one day. A few months later Prince Be left.

Basically, people seem to want our feelings only if they themselves are in need of empathy. As large emptied Marlboro cases of cartoon bubbles come out of my mouth where my interlocutor will write in what I’m supposed to say, it’s like I’m some kind of nuisance animal activists want to help on the weekends after they get their Subarus washed by the kids down the street

Underneath the fields is where our stories are buried. The monocrops were decisions made about our past, so I ask you to take the batteries out of the clanging wall clock before I go to sleep to prevent the supremacist art of domestication from permeating my dreams.

Inside of my raised fist is a struggling livelihood: there is sugar cane, corn, and certainly cotton. I’ve come here to climb the spiral rope back to the knowledge of the land, holding a scythe branded with the name i gave myself & my hands ache so much from having to dig you out,

I stop at every county cemetery no matter who is resting there. I am a gatherer of thousands,
how you said we don’t have to buy seeds driving past a town named Coon Valley as I inwardly flinch about a strange joke E. used to make about not seeing a relative “in a coon’s age,”

and the day i realized what she meant by that when she said it, how my fist in the will of my
stomach began to wilt, all their freshly mowed lawns burning with the crosses of their wickedness. a mother ushering her children to safety a story carried on by the next generation of plantlets,

since water has been proven to secure history, when public wailing feels like you’re a conduit for someone else. Caring for an unmarked  grave on her lunch hour, autocratic fields you can see from an airline window seat. We touch our callused feet together. Underneath this land is a

succulent downpour we are building from the lives calling to be excavated. The fists of black & brown women throughout the ages in a controlled heirloom heat. Seeds taking flight from the ancient fields of our wildflower palms for we are the mothers of thousands

Loyal vigilance is absolutely required to stay bad on my own terms. Today on blue Tuesday the Miscegenation Society has again issued a travel warning as my nursing body schleps through its mysterious synergies. Grief is patient. A dead cedar tree has more compassion than the average pope, blackened maidenhair ferns conked out in front of another bourgie girlconfession scene.

Grief also has a pattern.These cosplays are going full tilt now. I’m Sula in outre leather overalls driving stick with the mountains, an ACAB spellbinder fixing eggs that come from a lineage so lethal I explode into a brawny precision: Look at your fed up reflection & close your eyes. Make everybody look as worn out as you & the world will be yours because you are tired of it 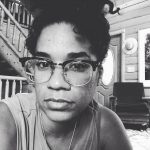 Nikki Wallschlaeger’s work recently has been featured in P-Queue, The Enemy, The Brooklyn Rail, LIT  The Journal Petra, Apogee & others. She is the author of the full-length collection Houses (Horseless Press 2015)  as well as the graphic chapbook I Hate Telling You How I Really Feel from Bloof Books (2016). Her second full length collection of poetry, Crawlspace, is forthcoming from Bloof Books in 2017. She is also an editor for Bettering American Poetry Anthology 2015,  a project promoting marginalized voices in contemporary poetry. She lives in Wisconsin.