I tried to write this pretty, but five false starts in, I give up and state it plainly:

I think I have something akin to survivor’s guilt.

“Ridiculous,” my father says. “Guilt is for people who have done something wrong. All we have is survival.”

I don’t know how to name what I feel, but it might be disquiet. I study writing in Fernando Pessoa’s Lisbon, in a program named for an apolitical writer who got woke and got censored in the last year of his life. What does it mean to see the world around you crashing and commit to your art?

And as I write, Baton Rouge police pin a black man to the ground, pierce his back and chest with bullets, watch him die.

And as I write, Minneapolis police shoot a black man in his car as he reaches for the proof they asked him to produce. And as I write, his girlfriend rolls her camera, captures her four-year-old saying, “Mommy, it’s okay, I’m right here,” as she captures the law, now administratively free, killing her love over a broken tail light.

And as I write, a sniper stations himself on a rooftop, aims at white life in uniform guarding Black Lives Matter activists, fires, kills five police officers in Dallas.

And I station myself in a tower in St. George’s Castle, aim at the cathedral window shape sun projected onto stone. Aim at the sun setting fire to River Tagus. Aim at peacocks strutting through gardens that survived an earthquake in 1755. Shoot. Capture and share.

And a woman from Angola spots me eating in Cascais, lifts her eyebrows and smiles in recognition and delight. Speaks to me in Portuguese. Calls my hair “bonita,” admires brown and blond kanekelon fibers twisted together, tips dipped in boiling water—African hands’ craft.

And a man from Cabo Verde takes my hand, dances with me on Largo do Chiado, to music I know from church and clubs. Speaks to me in Portuguese. Is surprised I live in Philly.

And I cry as I watch stars perform freedom on the BET Awards I see two weeks late: Sheila’s arms raised as purple guitar descends from heaven. Janelle’s jeans with butt cut out. Kendrick and Beyoncé’s feet, wet, stomp fire. Jesse’s jaw gum full as he says, “Freedom is always conditional in this place. ‘You’re free,’ they keep telling us. But she would’ve been alive if she hadn’t been so free.”

Email my mother, tell her I don’t want to return to the States.

Then I watch video of my cousins, age three, black boys, first time splashing in the Atlantic’s waves, Myrtle Beach, South Carolina. And I watch Portuguese children catch the Atlantic’s high tide, Cascais. And their kicks and laughter and hair full of salt and sand are the same.

And I want to still those images, freeze them there on both sides of the Atlantic, hold them in case I need proof one day that my family’s black boys were just like everyone else’s children, that they didn’t deserve what happened. And I want not to need proof.

And I want not to watch any more videos of souls fleeing black bodies for death’s safety.

And so I catch flakes falling from custard cakes.

(Ignore the sound of its name.)

Sit at my window listening

to flutes and strings sailing from across

I remember, “Resistance is the secret of joy,” and joy is resistance.

And I write my disquiet. 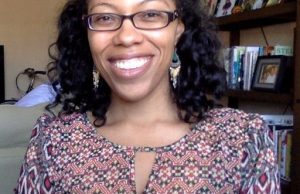 Mariam Williams is a Kentucky writer and educator living in Philadelphia and pursuing an MFA in creative writing and a certificate in public history at Rutgers University-Camden. She is also an alumna of VONA (2013 and 2016) and Disquiet International Literary Program (2016). Mariam writes a biweekly column for National Catholic Reporter, occasionally pens on her blog, Redbone Afropuff, wrote a column for several years in the Courier-Journal, and has been published in The Bozalta Collective; Salon.com; the anthology, Faithfully Feminist: Jewish, Christian and Muslim Feminists on Why They Stay; EBONY.com; and Calliope: The Journal of Women Who Write. Mariam has received writing awards from the Society of Professional Journalists, University of Louisville, University of Kentucky Women Writers Conference, Kentucky Arts Council, and Kentucky Foundation for Women, and is a Trustees Fellow at Rutgers. As an educator and teaching artist, she has taught creative writing workshops in grades K-12 in Philadelphia and Camden, NJ, and has trained adults in oral histories and documentary research.