Hecuba, rage as if you were still Queen, or at least make a sound,

so I can send the kingdom’s remaining children to you.

Do not stand for the throttled roses, the spent sons lying unburied at the gates,

vulnerable to the ridicule of the gods who were not rooting for us.

Having known the province of Thrace, your daughters can still put flowers

in your hair, boil vats of fat and rub it into your skin,

bury the jewelry in the fields. Join me in the founding of Rome.

We are the same now. I too sleep the entire time I am not yelling profanities

at the sky. Our homeland is inside me – in my throat and womb.

I can still carry it into the world. I’ve only to say the word

and there will be a dromedary and a horse at your garden,

cisterns of fresh rainwater and honey, the public humiliation of thousands

of Argives. But for all my power, I cannot find you,

and so like a drunkard collapsed in the courtyard of the foundry-works,

stirring at sunbreak, I cannot tell whether I am alive,

if I made it out of Troy’s conflagrations. If Rome was worth it.

I could have been the Empress of Russia, if I had tried harder

not to be born in the snowdrifts of a distant colony,

among glittering spruces and herdsmen waiting for their goats

to return from the mountains, as if summoned by a mosque’s call to prayer.

From a White’s revolver, in honor of Czar Nicholas the II,

my great grandmother took a bullet to the head. As she flung her soul to Allah –

dozed off under heavy chandeliers that each weighed as much as a human body.

Throwing up the last lights of the ballroom, tributes of sugar

and flour, name-day saints promised to return in a Mark V tank in the springtime.

If I could make an arrangement with them now, maybe I wouldn’t mind

but couldn’t stop them, that they dumped her body into a pile with

the others, so that it would be impossible for you to kiss her hands later

to talk to a tree or a snowflake without suspecting that she might hear.

If I can just have this morning, on the crosstown bus clutching a bottle of wine,

a sack of oranges and walnuts, so that we might bake something later,

the future like a wedding ring. I still have plans to liberate your people

to seduce Ministers of Finance and slit their throats in their sleep.

I’ll call you later, after I’ve returned to my apartment; and you’ll ask,

“What are you up to over there?” “Oh, just sitting around thinking about you.”

THIS WAS A BAD IDEA

It was a bad idea: in the dripping faucet of the past,

humanity shoved into jet planes, peeking from behind hospital curtains,

standing around like cut flowers in a plastic bucket.

It was a bad idea for it, then, to mean so much.

A resolve that has left us unaccounted for.

But isn’t it true that at least one person

somewhere is deciding that another matters,

loves her life, and suffers her body

like a conflagration of irises opening their mouths at once.

On a more or less regular basis,

they walk around somewhere holding hands.

Mephistopheles thinks they are soft in the head,

when they are, in fact, imbeciles.

If you should happen across them, throw a glass of water

in their faces. Yet I am grateful to them for pulling

us from the void of our departure,

in which we didn’t mean to go, much less be gone for so long.

When out of cowardice we fingered our own hearts

as if we were examining

a discounted vegetable at the supermarket

we too took what did not belong to us: a bicycle, the iris-choked

arteries of Mnemosyne, a child’s sleep,

When the breaking wheel of our humanity broke,

and starfish, we too unintentionally trembled with light. 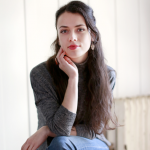 Elvira Basevich is a poet and philosophy instructor based in Brooklyn, NY. She is currently working on a book-length cycle of poems that in part retraces her mother’s journey as a Uighur refugee, while very pregnant with the author, of which the poems above are selections. She is also currently completing her Philosophy Ph.D. at The Graduate Center, CUNY on the political writing of W.E.B. Du Bois, focusing on the concept of freedom in the context of American modernity. Her poems have previously appeared in Word Riot, Construction, Inertia Magazine and elsewhere.