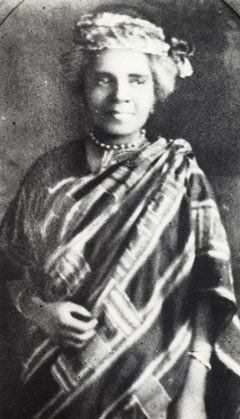 Adelaide Casely Hayford was, as she once described herself, a “race woman through and through.”[1]  Like Ida B. Wells, Mary McLeod Bethune, Una Marson, and other race women of the nineteenth and twentieth centuries, Casely Hayford was committed to public service and worked to improve the socioeconomic conditions of black men and women. A pioneer of women’s education in Sierra Leone, Casely Hayford played a key role in popularizing Pan-Africanist and feminist politics during the early twentieth century. In 1923, Casely Hayford established the Girls’ Vocational and Training School in Freetown, one of the first educational institutions in Sierra Leone to provide young girls with an African-centered education.

Born in 1868 into an elite Creole family in Freetown, Sierra Leone, Casely Hayford came of age during the period of British colonial rule. Originally founded in 1787, Sierra Leone became a Crown colony of Britain during the nineteenth century, further expanding the British colonial presence in West Africa. Like many other Sierra Leonean women born into Creole elite society, Casely Hayford was deeply influenced by traditional Victorian ideas of family and gender roles.

Her travels abroad fueled her growing interest in feminist and Pan-Africanist politics. In 1872, she migrated to London with her family where she studied at the Ladies College on the island of Jersey before studying music at the Stuttgart Conservatory in Germany. In 1903, she married attorney Joseph E. Casely Hayford with whom she bore one child—well-known poet Gladys Casely Hayford. In 1905, during one of her public speeches, Adelaide Casely Hayford emphasized the important role African women could play in the country’s social and political development.

Two years later, she relocated to the Gold Coast (now Ghana) to live with her husband but returned to Sierra Leone when the marriage ended in 1914. In Freetown, where she took up residence, Casely Hayford became a leading African feminist, using her speeches and writings to challenge male supremacy in African societies and to endorse African women’s political rights. In 1915, she delivered a public lecture in Freetown on “The Rights of Women and Christian Marriage,” articulating her vision for expanding African women’s rights and improving educational opportunities for young women. In the subsequent years, Casely Hayford traveled throughout the United States, delivering lectures on women’s rights and calling attention to the need for education reform for women in Africa.

With limited educational opportunities for women in Sierra Leone during the early twentieth century, Casely Hayford’s school for girls in Freetown was one of a kind. It not only provided vocational training but also emphasized African history and culture, and taught young girls how to be economically independent. Through the school’s course offerings, Casely Hayford intended to prepare young women for the responsibilities of being wives and mothers. At the same time, she sought to build racial pride in these young women and to instill confidence in their ability to become future leaders in all sectors of West African society. “Instantly my eyes were opened to the fact that the education meted out to [African people] had…taught us to despise ourselves,” Casely Hayford explained. “Our immediate need,” she continued, “was an education which would instill into us a love of country, a pride of race, an enthusiasm for the black man’s capabilities, and a genuine admiration for Africa’s wonderful art work” (Okonkwo, 1981: 43).

A staunch proponent of Pan-Africanism, Casely Hayford was briefly involved in Marcus Garvey’s Universal Negro Improvement Association (UNIA), the largest and arguably most influential Pan-Africanist organization of the twentieth century. From 1919 to 1920, she served as “lady president” of the UNIA’s Freetown branch, working alongside likeminded African women committed to advancing the organization’s core tenets including black pride and economic self-sufficiency.  In a 1922 editorial, Casely Hayford articulated African nationalist aspirations, noting that she was “looking forward…to a new day, in which Africa shall be allowed to expand and develop, along her own ideas and ideals…” (Okonkwo, 43). Years later, in 1927, she traveled to New York where she participated in the Fourth Pan-African Congress, a gathering of anticolonial activists from various parts of the African diaspora.

Adelaide Casely Hayford remained principal of the Girl’s Vocational School in Freetown until her retirement in 1940. In her later years, she continued to write, publishing several memoirs and short stories. On January 24, 1960, at age 91, she died in her hometown of Freetown, Sierra Leone. The school for girls she established, which closed in 1940 as a result of insufficient funding, paved the way for many more African-owned schools in West Africa. Casely Hayford’s desire to improve educational opportunities for African women and her unwavering commitment to Pan-Africanist and feminist politics left a lasting legacy for future generations of women in Africa and the African diaspora. She was a “race woman” in every sense of the word. 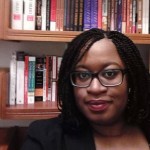 Keisha N. Blain is an historian of the twentieth century United States with broad interdisciplinary interests and specializations in African American History, the modern African Diaspora, and Women’s and Gender Studies. Her research interests include black internationalism, radical politics, and global feminisms. She is currently an Assistant Professor of History at the University of Iowa. Her forthcoming book, Contesting the Global Color Line: Black Women, Nationalist Politics, and Internationalism (University of Pennsylvania Press) uncovers the crucial role women played in building black nationalist and internationalist protest movements in the United States and other parts of the African Diaspora from the early twentieth century to the 1950s.