EMERGING FEMINISMS, Collective Love in the Time of Tension: On Racialized Sexual Harassment, Betrayal, and Forgiveness – The Feminist Wire

EMERGING FEMINISMS, Collective Love in the Time of Tension: On Racialized Sexual Harassment, Betrayal, and Forgiveness

In the final semester of my senior year at the University of Connecticut, a member of my informally formed feminist-activist collective and I filed a sexual harassment complaint against a professor. We knew, as two black women students, red-flagged at the university for a history of activism focused on the Title IX lawsuits, the eradication of structural violence, and anti-racism initiatives, that our complaint would never be taken seriously. We knew, as illustrated in the past, UConn would not deem the harassment “severe” enough. We knew we were up against a monster that was bigger than us, bigger than the professor, even; but, as Frederick Douglass famously put it, “Power concedes nothing without a demand” (p. 358). And so, we tried.  As a political project of naming the violence, we filed a claim with the Office of Diversity and Equity against the serial harasser.

Almost needless to say, the harasser was not found in violation of any sort of code of conduct enforced by the university. Instead, the report focused on our “attitudes” in its attempts to dismiss our experiences. And, of course, we were called “brave” in a condescending way that suggested our uncanny ability to render “simple small talk” as harassment and our odd inability to “take a compliment.” Yet, it was not the overwhelming jargon of the report, the harasser’s testimony that was consistent with his harassment, or the fact that the harasser will continue to be praised for his work that engages particularly with black feminist thought (despite his actual actions) that hurt the most; rather, it was the both the testimonies and silences of other students, other members of our informally formed feminist-activist collective, that hurt me more.

The student testimonies broke my heart because, not only did they invalidate our experiences in order to support the harasser, the testimonies neglected the stark race/gender/class/power dynamics at play. These students—some of whom I had marched alongside during campus demonstrations, some of whom were mentored by the same brilliant professors I was—neglected the relationship between the harasser: a self-described world-renowned, well-paid, handpicked professor at the university, and the harassed: two young queer black women students. According to the report, the students, particularly the men students, also seemed to neglect how their experiences in the classroom during the harassment were directly linked to their personal identities, their relationship to the professor, and their own desire for power. By not openly acknowledging these very critical factors of the case, many of the students who served as witnesses created a space where the co-complainant and I were presented as liars and exaggerators. However, it was these students who embellished their witness testimonies to make it seem that our “attitudes” (or what I know as our discomfort with being sexually harassed) were cause for the harassment.

This is not to say that the students are the only ones to blame for the decision made by the Office of Diversity and Equity. Our case manager and, ultimately, the harasser, are truly responsible. I also want to be clear that I understand the predicament some of the students were in: many of them did not want to jeopardize their future relationship with the harasser or their grade in the course. I get that; the co-complainant and I struggled with the same sentiments. Student activists’ distrust of the administration and knowledge of the lack of true confidentiality also adds an additional layer of horror when it comes to reporting or testifying. But, at the heart of it, the student testimonies created a narrative that justified and ultimately denied the harassment. This fact cannot be overlooked or ignored.

When thinking of the students who served as witnesses to protect the harasser, I am reminded of Audre Lorde’s essay, “Sexism: An American Disease in Blackface” published in Sister Outsider.  I put forth Lorde’s question, a question the co-complainant and I struggled with throughout the semester:

I put forth this question with a strange combination of urgency and hesitancy. I am frantic because it has been over thirty years since Lorde asked this question and the answer is still not complete. However, I am hesitant to limit this conversation to an understanding of “black women” versus “black men” because these identities are not total or all-encompassing. Yes, my experience with this case of harassment is specifically connected to the historical misconstructions of black womanhood and the constructed legibility of my body as female/woman/feminine, but it is also deeply connected to my age, my status as a student, and my sexuality. To limit the conversation to one that solely focuses on cisgender black folks ignores and erases the violences experienced by many others.

In this case, the co-complainant and I struggled with Lorde’s question because we felt that reporting a black man would repeat the violent narrative of the cis black man’s insatiable sexuality. In an effort to ally ourselves, we remained silent for far too long and endured far too much harassment. Why should we have suffered in silence? And why, ultimately, did no one ally themselves with us?

Part of the answer, which Lorde explains in the essay, is simple: the devaluation of black women by black men is considered an essential aspect of black liberation in some spaces. If black men adapt to and adopt western patriarchal sexism, they become part of the machine, a member of the club. The black men students, in particular, see a piece of themselves in the harasser. He is someone for them to look up to, to emulate. To spit on his name is to spit on their own. To overlook his transgressions are to forgive theirs. To ignore the experiences and subsequent pain of their black women peers is to justify and perpetuate the violence.

This hurts me more. Truth be told, I could hardly finish reading the harasser’s testimony because of the physical pain it caused in my stomach. The student testimonies, however, hooked me, mostly because I couldn’t believe my eyes. This betrayal complicates the potentiality of radical collective love. By collective love, I mean a community where compassion and empathy for those in the collective is situated at the forefront for coalition building and activism; it is a community sustained through mutual support, trust, safety, dialogue, kindness, and respect. To violate that love is to undermine our collective struggle as students at a university that thrives off of the violence we endure. To violate that love is to break everything we built.

This betrayal also complicates my personal and professional relationships with these witnesses because the love, trust, and respect is destroyed. There is no safety there, no support. I am supposed to assume their kindness and kinship in their bold silences, in their unanswered messages, in the direct avoidance of their own culpability. This only enhances the pain.

Although it has been difficult for me to arrive at a place where I can say this and mean it wholeheartedly, I still believe in the power of radical collective love, meaning I believe in the possibility of genuine forgiveness—a forgiveness that, rather than erase it, engages with the past while focusing on the future for the survival of critical coalitions. But, genuine forgiveness is not just a verbalized “apology accepted;” to begin, it must be asked for, struggled through, and negotiated. This type of forgiveness comes with tough and honest conversations, a rethinking of boundaries, and a rebuilding of trust. Yes, it comes with heartache, but with patience, sincerity, empathy, and dialogue, there is space to renew radical collective possibility. There is space to continue the important work of collectively naming violence and collectively working to eradicate it. There is space for big love.

There is space for big love. 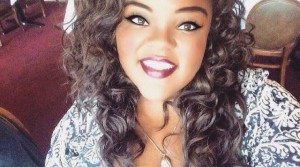 Martina “Mick” Powell is a queer black feminist poet who uses she/her pronouns and likes revolutionary acts of resistance. She is a recent graduate from the University of Connecticut where she obtained a B.A. in Women’s, Gender, & Sexuality Studies and Africana Studies and a concentration in Creative Writing. Mick loves performance poetry, magnolia trees, hip hop music, and tea. She is one of the Associate Editors of the Emerging Feminisms section at The Feminist Wire.