Black Girls and the Police State Menace – The Feminist Wire 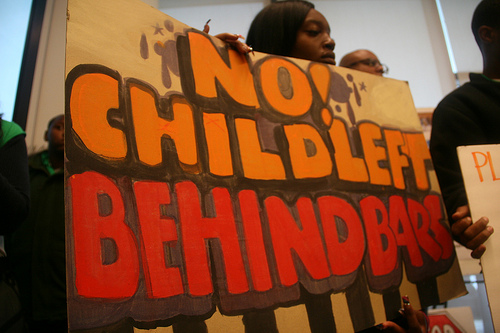 Whenever there’s a black girl on a school campus wielding a dangerous weapon like a cell phone, white macho can always be counted on to come to civilization’s rescue with the full force of fascist violence. These days, unarmed black children rank higher than mass murderers with semi-automatic weapons as public enemy number one on American school campuses.  Shortly after the videotaped assault of a cell phone wielding sixteen year-old Spring Valley High School student in Richland, South Carolina by a white male school resource officer went viral, a New York Times letter writer naively asked—“Why are children not treated like children when they do silly things?”

Why? Because black children have never been children in the eyes of the police state and its proxy, American public education.  Nor do they qualify as victims within the lens of a corporate media regime hell bent on exploiting black pain, à la  news outlets like CNN.  Zealously milking the moment for maximum reality TV effect, CNN correspondents played and replayed the brutal image; first, as the silent backdrop to an interview with a Richland school board representative, then as a frame-by-frame analysis to evaluate the girl’s “responsibility”.  In their “analysis”, the upraised arm of the girl being dragged from her desk was transformed into a strike against the officer.  Her flailing legs were parsed as a potential “assault” on his person.  Claiming “she had no respect for the school or her teacher”, CNN commentator Harry Houck deemed the assault to be justified, conjuring racist-sexist stereotypes of black girls as violent, lawless Jezebels.  As Color of Change activists have argued, this shameless victim blaming is itself a form of emotional and psychological trauma that would never be inflicted on a white girl.

The criminalization and policing of black girls on school campuses has been well-documented by the U.S. Department of Education and the African American Policy Forum, headed by esteemed activist law professor Kimberlé Crenshaw. Black girls aresuspended more than any other group besides black boys.  They have higher suspension rates vis-à-vis white girls than do black boys in comparison to white boys. One of the most insidious aspects of race/gender disproportionality in school discipline is the double standard of conduct—when black girls “act out”, talk back, wear “inappropriate” clothing or use restricted personal items like cell phones in classrooms they’re disciplined more harshly than whites who commit serious offenses such as assault.  The Indiana Education Policy Center’s 2000 “Color of Discipline” report concluded that black students were more likely to be referred out of class for lower level infractions such as excessive noise, disrespect, loitering and “threat.” Hearkening back to its Jim Crow legacy of anti-black terrorism, black children in the South are more likely to receive corporal punishment than are students in other regions.

So while white children are given the social and cultural space to “just be kids”—acting out, talking back, playing with gadgets and clothing styles—black children must always toe the line of respectability or risk detention, assault and/or death.  And while white children of all class backgrounds have greater access to college preparation curricula and college resources, many black students have greater “access” to school police than a college counselor.

From high-achieving older students to the tiniest students just starting out, black girls are criminalized at every step of their school careers. In a widely publicized 2013 case, sixteen year-old chemistry student Kiera Wilmot was arrested, led away in handcuffs, and expelled from Bartow High School in Florida for a science experiment gone awry.  In 2012, the handcuffing of black female preschoolers and kindergartners in Georgia elicited a groundswell of activism around the egregious numbers of very young black children who are suspended and expelled. Despite being only 18% of the preschool population, black preschool students receive 48% of school suspensions. By contrast, white students comprise 43% of all preschoolers and 26% of those suspended.  Responding to these horrendous demographics, school-community activists of color have pushed for restorative justice programs, fewer police, and less paramilitary weaponry on campuses.

In Richland, black students are 59% of the student population and 77% of those suspended.  The Richland Two Black Parents Association has been working with the national Dignity in Schools campaign to get the district to implement a culturally responsive discipline code “that clearly spells out that peaceful students will not be dealt with by law enforcement, but by school officials.” Addressing the epidemic of school push-out and prison pipelining that targets students of color, Dignity in Schools has advocated for a human rights-based discipline model which would replace school resource officers with community intervention workers trained to do mentoring, conflict resolution and peace-building in heavily criminalized schools.  Changing the paramilitary climate of schools of color would remove the real menace to the mental health, wellbeing and academic success of African American youth who are bearing the brunt of the U.S.’ mass incarceration cancer.