In my Sophomore year of college a straight-identified masculine-presenting cisgender heterosexual guy-friend surprised me by saying: “I want to be you for Halloween. Can I borrow some of your clothes?”

At first I thought he was joking. But since we were virtually identical in build and height (6’2), the request was at least physically feasible. I invited him to my dorm room to discuss. He was serious.

After modeling a few options he settled on a costume that he thought that people on our small residential college would recognize as “Kari:” a blue beret, an oversize vintage letterman’s jacket (my favorite jacket at the time, handed down from my father from his college athlete days), an oversized white oxford shirt, a few long necklaces, and a form fitting below-the-knee blue wool skirt. He even borrowed a pair of my flats.

In those days (mid-late 80s) my highest heels were my basketball shoes which to my coach’s delight rose me off the ground an extra inch or two. But off the court all of my shoes were as close to barefoot as possible to help ward off the common comments (accusations?) that I was “too tall.” (To which I would silently retort: Too tall for what?!).

At a drunken Halloween bash later that week I ran into my friend in his Kari outfit. Although I too was in costume (dressed as Cleopatra, or at least an attempt to replicate Elizabeth Taylor’s fabulous rendition of the ancient Egyptian Queen), we laughed at the absurdity of me essentially meeting myself at a party.

My friend’s costume was a hit; dressing as a playful feminine version of his everyday self (including the tomboy twist of a letterman’s jacket) seemed to enhance his heterosexual appeal. He left the party that night with a pretty, petite woman who would become his girlfriend for the next two years.

Meanwhile my costume – also a more playful feminine version of my everyday self – had the opposite effect. In the midst of what I thought was a promisingly flirtatious conversation with a cute boy the young man’s face paled. He blurted out: Wait: are you really a woman? Or are you a man?

I knew that his panic was really about his own sexual crisis: I am attracted to you, but if you are a man than does that make me gay!? But the question still felt like an assault. I had grown accustomed to comments about my height but this was the first time my identity as female had ever been directly interrogated. I assured him that I was female and that his (hetero)sexual identity was safe. Then I walked away and never talked to him again.

The semester following that first time I was seen/feared as trans*, I enrolled in a feminist literature course taught by a handsome man professor with a tendency to wear butt-enhancing Levi’s. In response to reading Virginia Woolf the professor asked us to write about the limitations of gender roles. My essay described how I felt sorry for men because they are not allowed to wear feminine clothing; everyone should be able to experience the pleasure of lace and lipstick, I argued. My professor told me that I needed to think more about how such blatantly feminine and sexual presentations only serve to hurt women.

That same semester, an overtly anti-feminist man professor argued in an op-ed to the student newspaper that the problem of sexual harassment and rape would stop if women quit wearing sexy clothes.

I knew that both of these classic feminist and anti-feminist stances against feminine, sexy clothing were limited and erroneous. But it took me a few more years to understand how both arguments were also connected to that startled young man’s response to me on Halloween.

In the following decade I dated cisgender women and cis and transgender men, including a four year relationship with my friend who had dressed as me for Halloween. I gradually moved into Queer culture and came out as lesbian, which subsequently gave me the acceptance to don more visibly femme (as well as more butch and andro, if I felt like it) attire. I still worried about social punishments for femininity especially for those who were not cisgender women, but the growing visibility of transwomen and drag queens helped to soothe my conscience. (The pleasures of lipstick and lace were becoming available to all, right?)

Meanwhile I was surprised to find that my transition into more sexual and gendered freedom also brought more questions about my sex category. “Are you a man or a woman?” became the new “You are too tall.” This question came from strangers on the street. They came mostly from (presumably) heterosexual men, but some also came from queer men and women. My tall body regularly produced startled gasps by cisgender women in public bathrooms. One time while on a date with a woman in a lesbian bar a stranger tapped me on the shoulder and said: “Hi. We have a bet going on there at this table (gesturing to a group of cisgender women). Some of us think that you are a woman, and some of us think you are a man. What are you?”

In each of these situations, I was able to roll my eyes and assure my interrogators that I was a woman of a female-born variety. But their interrogations served as a constant reminder of my status as someone on the boundaries of acceptable gender. I began to wonder if I would ever find a place where I could be as tall and as femme as I wanted to be without being subjected to cross-examination about my assigned sex or my preferred gender expression.

But my irritation and hurt at feeling mis-classified also served as a broader alarm: What about my transfeminine sisters who were not able to provide their tormentors the same re-assurance? 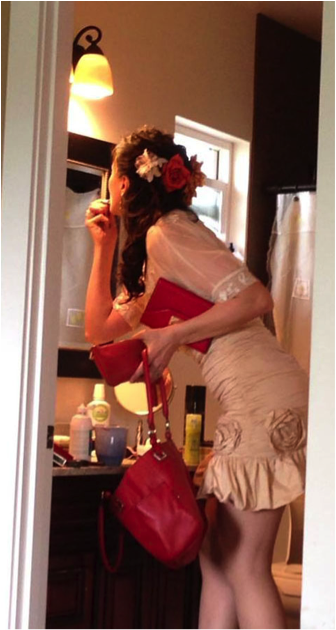 Photo caption: Snapshot of me primping for a Queer event; April 2014.
Photo by Shari Dworkin.

Hate violence against transgender individuals, especially trans women of color, is endemic. This violence does not always involve direct physical assaults. Instead, systemic structural assaults accumulate over time, with transgender individuals facing severe discrimination and hostility from their families, schools, health care providers, potential employers, and policing agencies. Given the systemic lockout from primary institutional protections it is no surprise that trans* individuals are disproportionately poor, unhoused, and reliant on alternative economies such as sex work for survival (where they face criminalization and various forms of punishment by law enforcement).

And these are just statistics for those who have survived incidents of targeted hate violence. In 2014 alone, twelve transwomen of color were murdered in the United States. And in the first few weeks of 2015, the lives of at least seven transwomen, all women of color, have already been violently taken. 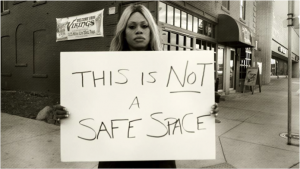 Actress and transgender activist Laverne Cox in a screen shot from the documentary “Free CeCe” (expected release 2016) which tells the story of CeCe McDonald, a young transwoman of color. In self-defense from a transphobic attack, CeCe fatally stabbed her assailant with a pair of scissors. She was convicted of second-degree manslaughter and incarcerated in a men’s prison. With the help of a team of vocal advocates and activists including Laverne Cox, CeCe McDonald was finally freed from prison in 2014 after serving nineteen months. (Image source: http://www.freececedocumentary.net/home.html )

Clearly the structural and interpersonal violence experienced by trans women and especially trans women of color far outweighs the occasional social invasion I experience when questioned about my sex category or gender expression. My whiteness, class position, able-bodied-ness, cisgender status, and numerous other privileges bring countless benefits to my accumulated and daily life experiences.

Yet my own history as a relative outsider to normative sex and gender systems has also helped cement my commitment to working against all forms of gender policing, especially those that impact trans*, genderqueer, and gender outlaw identified individuals. My approach has also greatly benefitted from the work of many trans*, sex worker, anti-racist, and anti-carceral advocates and scholars such as Kate Bernstein, Laverne Cox, Leslie Feinberg, Emi Koyoma, Janet Mock, Julia Serano, and Dean Spade. Collectively these authors and many more have helped articulate a clear rationale for gender inclusive, femme-celebratory, creative, adventurous, decriminalized, anti-racist, anti-classist spaces for all. With this in mind, I have a few proposals:

The spirit of these aspirational questions are already being actualized within trans* and genderqueer friendly organizations such as the Sylvia Rivera Project, HIPS (Helping Individual Prostitutes Survive), and Women with A Vision. But many other (well funded) feminist and queer organizations stay silent on (or worse: promote) social and economic policies which create disproportionately harm trans* people of color.

We are in a cultural moment with unprecedented media visibility of trans* identities and lives. Cisgender people are increasingly becoming adoring fans of trans women of color celebrities such as Laverne Cox and Janet Mock. However, when these same fans (and advocates of gender freedom more broadly) do not then lend their concrete, material support for black trans women’s lives, this is equivalent to white fans donning the jerseys of their favorite African-American sports heroes but resisting the idea the Black Lives Matter. It is time for the fans of trans* celebrities to finish off that last episode of OITNB, strap on a pair of fierce heels (or basketball shoes, or flats), and join the effort to end all violent trans* and femmephobic attitudes, policies, and practices. 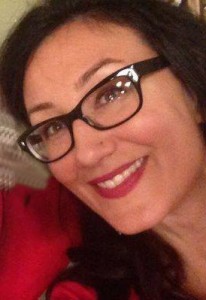 Kari Lerum is an Associate Professor of Interdisciplinary Arts & Sciences and Cultural Studies at University of Washington Bothell, and Adjunct Professor in Gender, Women, & Sexuality Studies at University of Washington Seattle. Her recent research and activism has critically evaluated popular discourses about the “sexualization of girls,” and discourses and policies about sex work and human trafficking; her current research includes a community-based project with trans* and genderqueer sex workers in the Seattle region. In the blogosphere her writing can be found at Sexuality & Society, Ms Blog, and RhReality Check. Her more extensive academic writing can be found in journals including Anti-Trafficking Review, Gender & Society, and Journal of Sex Research, Most recently, her article, “A FemmeNist ManiPedifesto” appeared in Cultural Studies ó Critical Methodologies.