Judy Bonds, an inspirational woman activist leader of the fight against mountaintop removal coal mining in Appalachia, U.S., echoed the following quote attributed to Gandhi: “We are the ones we’ve been waiting for!” (Bell 2013:164). We are the ones we’ve been waiting for and we must work together to build the world we want. Such a world cannot be based on the system of neoliberal capitalism that has destroyed our planet and the quality of life of many of its inhabitants to enable a few to make objectionable amounts of money.

Climate change threatens what social and environmental justice activists have worked to achieve. The injustices of racism, sexism, homophobia, anti-immigrantism, nationalism, contamination of water and air, and the destruction of homes – of people, plants, and animals – are the result of, and are necessary for, the current political and economic systems of our world. This system has now created climate change, the latest social injustice to Capitalism’s name. We must see the climate crisis as the social crisis that it is and act accordingly. 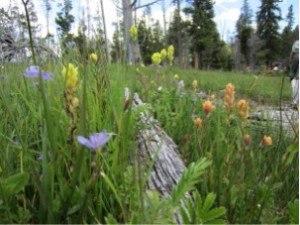 The experience and wisdom of activists and writers highlighted in this essay, and social movements building around the world, point to a process and goal of feminist climate justice, a justice which emphasizes the root causes of the climate crisis as social injustices and the solutions as acts of social justice. The voices and ideas of women, who are the majority of the world’s poor and both most affected by and least responsible for climate change, must be at the center of these actions. Women’s complex experiences, configured by gender, race, sexuality, class, and location, illuminate the workings of systems of oppressions and reveal socially and environmentally sustainable paths forward.

Globally, the United Nations is the body tasked with addressing climate change. So far, it has done little to advance feminist climate justice. I participated in the 2013 civil society walkout on the 19th Conference of the Parties (COP) to the United Nations Framework Convention on Climate Change (UNFCCC) in Warsaw, Poland and see little hope of the UN process delivering the rapid, just paths forward that we all need. Negotiators make up their minds about what is “politically feasible” long before they arrive at these summits, and women’s voices are marginalized in UN and UN-protest spaces. The Women’s Environment & Development Organization (WEDO) notes that from 2008-2012, women represented only 32% of national delegation members to the UNFCCC and only 19% of heads of delegations. Anne Peterman (2011) has similarly identified patriarchy at work in global climate justice movement actions. At the 2011 COP in Durban, South Africa, male leaders of big green environmental organizations marginalized women and youth in protest strategizing and representation. 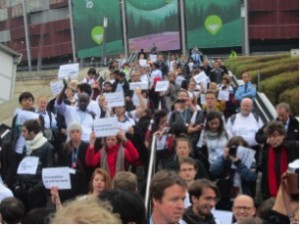 Women’s voices and ideas must be included if we are to develop just ways of life. One mechanism to create change, a mechanism that is historically more representative of women and other marginalized community’s voices, is for massive social movements to pressure their governments to make the impossible possible—to get the solutions going on the ground and build the political will so that something can happen at the global level.

The People’s Climate March in New York last September was a happy and powerful action toward these ends. It surely resonated in the hearts of the 20,000 people who marched in defense of mother earth in Lima, Peru on December 10, 2014. However, it did not inspire delegates as they began the 2014 COP 20 negotiations in Lima; in reports on the conference’s opening days, the People’s Climate March received a three word mention in the opening conference speech by Manuel Pulgar-Vidal, Peru’s Environmental Minister and president of COP 20, and wasn’t even mentioned by Third World Network as one of the “recent key events in the climate change arena.” 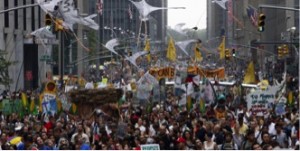 At COP 20, countries of our world once again met with the supposed purpose of “protect[ing] the climate system for the benefit of present and future generations of humankind, on the basis of equity and in accordance with their common but differentiated responsibilities and respective capabilities” (Article 3.1 United Nations Framework Convention on Climate Change (UNFCCC)). These are well-articulated, admirable intentions describing the basis of a 20-year-long process that has made virtually no progress toward equitably addressing the climate crisis that now, and increasingly every day, represents a death sentence for people, cultures, ways of life, plants, and animals globally. The Intergovernmental Panel on Climate Change’s 5th Assessment Report tells us that the world’s biggest polluters have already emitted over half of our carbon budget. In this context, we must keep 80 percent of fossil fuel corporations’ reserves in the ground to have any hope of staying within our budget (See “The Terrifying New Math of Climate Change” by Bill McKibben) and having a livable future on earth.

Despite these numbers, the world’s climate change negotiators spent their two weeks at COP 20 deliberating non-action. By 2020, their Green Climate Fund is supposed to receive $100 billion annually from developed countries to assist developing countries with climate mitigation and adaptation. As of now, countries have pledged only $10.2 billion for 2015-2018. How do we get from 10 to 100 billion? These pledges pale in comparison to the tenacity of the ruthless fossil fuel industry. In Santa Barbara, California, Big Oil just spent over 7 million dollars (just three million dollars short of Mexico’s 2015-2018 Green Climate Fund pledge) in the 2014 mid-term election to defeat a local anti-extreme extraction ballot measure by grassroots community groups. Corporate profits drive climate change and prevent climate justice actions at global and local levels (see Naomi Klein’s This Changes Everything for a brilliant analysis of the links between capitalism and climate change). Mass mobilizations of feminist social movements are one of the most promising ways to confront these corporations in the short time frame we have to address climate change.

Leila Watson, Australian Aboriginal activist and artist, said, “If you have come to help me, then you are wasting your time. But if you have come because your liberation is bound up with mine, then let us work together” (Moore and Russell 2011:15). Our actions to mobilize our communities to protect our future must be firmly grounded in a sincere solidarity with all struggles for justice. We must take feminist climate justice actions that “advance a rights-based agenda consistent with the frameworks established collectively by the international climate justice movement [think of this as including all social justice movements]; take leadership from and be accountable to those most directly impacted and least responsible; [and] engage in community struggles on the root causes of climate change” (Dayaneni 2009). 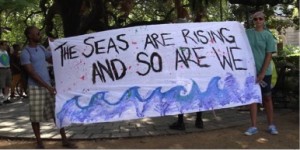 Women, people of color, indigenous peoples, peoples of the Global South, the poor, and their ideas and practices, must be the center of efforts for feminist climate justice. They are well positioned to design and implement sustainable solutions. On an earth and in a society in crisis, their experiences hold the key to a brighter and more equitable society. We must stand up in solidarity, listen well, share resources, and get out in the streets to demand and create feminist climate justice now. The future of human life and certainly quality human life, or buen vivir, depends on it.

Let us create a society where everyone has sufficient food and water, time for creativity, and lives in harmony with the natural world. A life where we consider collective well-being rather than individual competitive growth. 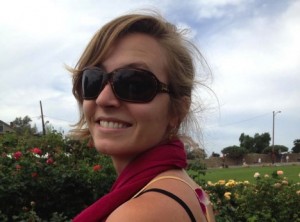 Corrie Ellis is a Doctoral Candidate in the Department of Sociology at the University of California, Santa Barbara where she researches and teaches feminist climate and environmental justice, gender, social change and activism, and public sociology. Her dissertation examines grassroots resistance to extreme extraction in California and Idaho and is inspired by her activism as a core member of 350 Santa Barbara.