Reclaiming the Narrative: On #SurvivorLoveLetter, Community, and Radical Healing – The Feminist Wire

Reclaiming the Narrative: On #SurvivorLoveLetter, Community, and Radical Healing

On Valentine’s Day 2009, I had sex for the very first time. It was my sophomore year of college, and I had fallen in love with an older guy who worked in the same grocery store I did. Even though he and I weren’t in a committed relationship, I loved him and I knew (at the time) I wanted him to be the first person with whom I had a sexual experience.

Two months later, he would sexually assault me. The coercion would leave me feeling unsettled and unsure of what to make of him and our relationship. I loved him. I had wanted to have sex with him before, and I might want to have sex with him again. But that night, I said no—more than once—and he did not listen to me.

Five months after that, I would learn he had also given me an STD. Three months after that, he would end our relationship, telling me had a new “serious” girlfriend. He would go on to marry and have two children with this girlfriend. During the entire time we were together, he told me that he couldn’t be in a long-term relationship with me, as he needed time and space to “work on” himself.

Needless to say, Valentine’s Day does not bring up for me the same lovey-dovey, saccharin feelings as it seems to for others. It reminds me of a two-year relationship with someone who repeatedly coerced and manipulated me for his own selfish reasons. It reminds me that for two years, I surrendered my own power and autonomy in an effort to try to get someone who was incapable of loving me to do so. It reminds me of everything that has happened since Valentine’s Day 2009, and the many years I’ve spent trying to dig myself out of pain, trauma, and shame.

So when Tani Ikeda asked me to participate in her social media movement #SurvivorLoveLetter, my immediate response was, “Hell, yes!”

Tani is a brilliant, badass filmmaker. She is also the co-founder of imMEDIAte Justice, a non-profit that teaches adolescent girls about feminist filmmaking and media empowerment. I’ve known Tani for a little over two years. She facilitated workshops and produced some incredible films for us when I worked as a sex educator for Planned Parenthood. We also know many of the same brilliant, badass feminist creators in Southern California.

Like me, Tani is a sexual assault survivor. Like me, she has worked to reclaim her self, her body, and her narrative since being attacked.

On what served as the catalyst for #SurvivorLoveLetter, Tani told me through e-mail, “Valentine’s Day is always hard for me because every store front is decorated in red and pink reminders that this was the day I was sexually assaulted. The week before, I wrote in my journal: After surviving my rape I spent 10 more years surviving chronic depression and a perpetual feeling that I had to continue to fight for my life. This is my survivor love letter. Don’t give up on your own happiness.”

For so many survivors, loving ourselves and finding happiness after our attacks is a daily uphill battle. And that’s on a good day. On a bad day, it seems damn near impossible.

I know I am not alone in this. Tani expressed similar sentiments: “I am a relatively high functioning person with PTSD, but every morning I wake up with pain in my body. The pain feels so deep inside my bones. It’s an ache that’s always there.”

And so, to be a survivor often means navigating a minefield of trauma and triggers. This minefield is our lives. And yet, in the midst of it, we have to find a way to heal and journey on, to (re)build ourselves. Because this is the only option; because this is the only way we can take ourselves back from the depression, anxiety, and hurt that threatens to swallow us up if we don’t.

This journey to make ourselves whole again looks different for every survivor. And it also resembles nothing like what we are told in the media about healing after sexual assault.

“Healing doesn’t look the way I thought it would,” Tani said. “Because I talk to young women about using their stories to find agency in their own lives, I wanted to find a way to openly talk about what survivorship really looks like through #SurvivorLoveLetter. I don’t want to perpetuate the myth that the violence you’ve experienced turns you into a super hero. That narrative is too simplistic, and renders all the days I can’t get out of bed invisible.”

This commitment to creating a space for survivors to get the story right about their own unique restorative process is why #SurvivorLoveLetter has had such a huge impact. It allows survivors, in our own words, to rewrite the narrative about our healing. It allows us to transcend the label of “sexual assault survivor” into something that we may or may not struggle to be again for the rest of our lives: wholly and freely ourselves.

When I opened my laptop on Valentine’s Day of this year, the outpouring of love and companionship and truth was heart-filling. Friends were sharing their own Facebook updates and tweets about #SurvivorLoveLetter, as both allies and survivors. Folks I didn’t know wrote the most beautiful, empowering, honest letters through the #SurvivorLoveLetter Tumblr.

This is due largely to Tani, as well as other contributors and collaborators in the movement: incredible movers and shakers like Suey Park, Amita Swadhin, Lisa Factora-Borcher, Patrisse Marie Cullors-Brignac, Jennifer L. Pozner, and Jaclyn Friedman.

Since Valentine’s Day, there has been an overwhelmingly positive global response to #survivorloveletter. Media outlets like Feministing, Mic.com, BuzzFeed, The Huffington Post, and others have all written about this revolutionary movement. Submissions to the Tumblr continue to pour in, as survivors from all over continue the harrowing work of loving and forgiving themselves.

Although it’s well past Valentine’s Day, this movement is still gaining momentum.

“Even though the intent was to send love to survivors on a day that is particularly triggering for a lot of us, I hope that people continue to submit their letters of love on the Tumblr and use the hashtag as a daily declaration of self love,” Tani explained, when asked about what she hopes people take away from #SurvivorLoveLetters.

It is also important to remember that the act of reclaiming and healing is just as powerful offline as well. “The most memorable part for me was when I invited friends and survivors from the online community to have a potluck dinner at my apartment and we each read our letters out loud. There was such generosity in people sharing and a more intimate quality to the storytelling in person,” Tani told me, regarding how she spent her Valentine’s Day weekend.

This emphasis on community and movement building, to foster a network of survivors and allies, is important to Tani. “There is a larger transformative justice framework that this conversation is a part of. Women of color organizers have been pioneering what it means to create a movement of wholeness for generations. Audre Lorde said, ‘Caring for myself is not self-indulgence, it is self-preservation, and that is an act of political warfare.’ Alexis Pauline Gumbs taught us how to mother ourselves and find the deep healing we yearned for within. There are also more survivor resources, like Lisa Factor-Borcher’s survivor anthology, Dear Sister.”

Tani spoke about how it feels to have created such a powerful movement: “I am so humbled to be a part of this beautiful legacy of healing through radical love and hope that #SurvivorLoveLetter is contributing in some small way to our knowledge about how we heal ourselves and our communities.”

#SurvivorLoveLetter has had a significant impact on me (slowly) coming into peace with my sexual assault, due to having found a new online solidarity between survivors. I thank Tani and all the other participants for this.

It has been six years since my attack. I am finally in the space where I feel ready to move forward. I can’t erase what happened to me. But I have the power to rewrite the narrative. To be the victim, to be the one he took something from, to be the one who gave it away—I cannot let this be my story any longer.

There is still love left for you. There is a life for you, where you do not hate your body, where being touched by a man does not scare you. It feels distant now, but it is so much closer than you know.

You are your biggest Love. You are not broken or damaged. You have no one to apologize to. You deserve to feel whole and free and healed. And you will feel those things one day soon.

You are beautiful. You matter. You are love(d). And I will spend the rest of my days making sure you know this.

Thank you for surviving. 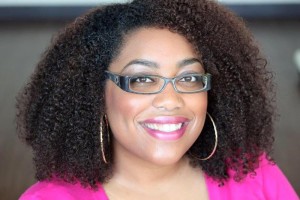 Michelle Denise Jackson is a writer, storyteller, content creator, educator, and performer from Southern California. She received her B.A. from NYU’s Gallatin School of Individualized Study. She is currently the editorial assistant at ForHarriet.com and co-creator of the original web series, GIRL, GET YO LIFE!. You may find more of her work and musings on her website or by following her on Twitter: @MichelleJigga.

Related Items#SurvivorLoveLetter
← Previous Story REVIEW: All About Skin: Short Fiction by Women of Color
Next Story → Poem: “existing while being female”