“We are here because the gay community has been silent. We need you in the streets with us. We honor the lives of murdered black trans women and queers.”

This group of queer and trans people of color, supported by white allies, had taken to the bars and the streets to challenge mainstream gay communities and organizations to take action against anti-Black racism. The Castro, specifically, is known for being hostile to queer and trans people of color, perpetuating anti-black racism through its cultural norms and practices. Similarly, mainstream gay organizations continue to align themselves with white, middle-class experiences at the expense of their most marginalized community members. And despite having radical roots in the struggles of queer and trans people of color, such as Marsha P. Johnson and Silvia Rivera, mainstream gay organizations continue to de-center race and racism from their work. Except when it is convenient and profitable, that is. 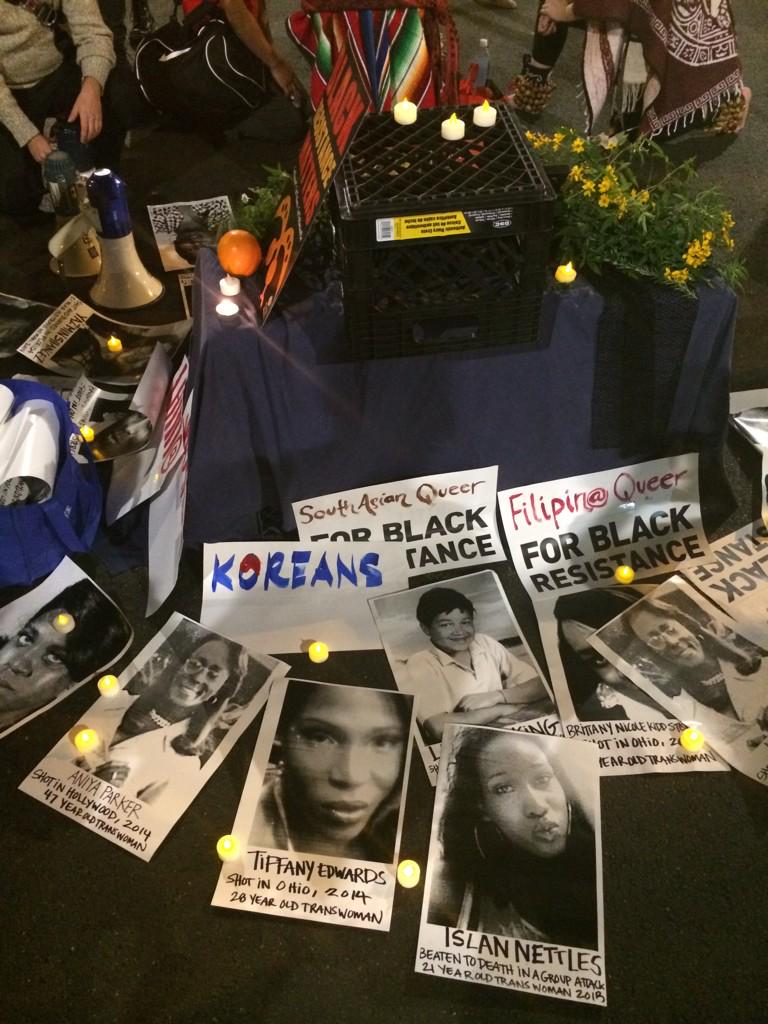 We entered Toad Hall and the SF Badlands Bar to invite the mostly white clientele of these bars to join us in affirming that Black Lives Matter. Instead, we were met with unabashed hostility. We chose Toad Hall because of its history of displacing Black gay community from the Castro. Wearing red for blood—red for STOP—we held photos of murdered Black trans women and queers next to flameless candles and led a ritual of mourning. Forming a circle in the middle of the dance floor, we looked outward to face the bar patrons whom we wanted to challenge, speak to, and move. In the faces of the crowd, we saw a sea of mixed responses— ambivalence, rage, compassion, confusion, and discomfort.

We began to chant the message we came to share. The DJ gave us the middle finger and cranked up the music to an ear-splitting level. The energy shifted. It became tense. Our bodies and voices were taking up necessary space. Our presence was threatening the bar management’s complicity with histories of racism in the Castro. Our words were unsettling the leisure of Toad Hall patrons who have through inaction been complicit with a society that condones state-sponsored violence against Black lives. 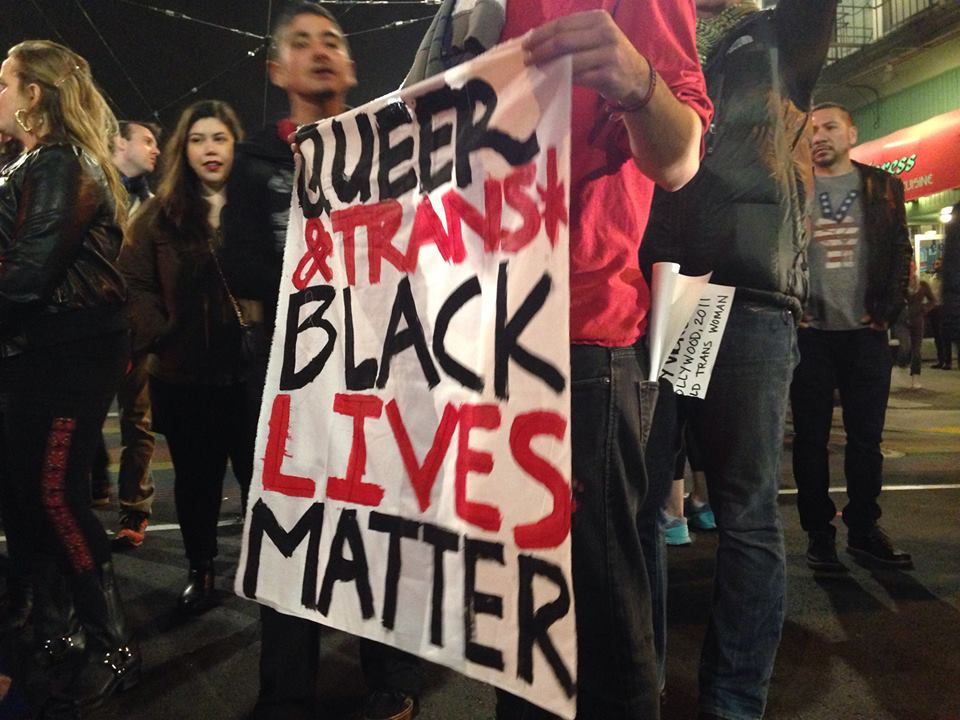 As we called out the mainstream gay community’s complicity with white supremacy and transphobia, we experienced violence and aggression. Things escalated over the course of the ten minutes we were on the dance floor. What began as micro-aggressions, such as turning up the music, turned into physical violence and verbal attacks. Bar patrons yelled derogatory names. Someone threw a glass. Doors slammed. Finally, a white bar patron hurled a large trashcan into the center of our circle, hitting two of us in the back and on the head.

We wanted to mourn. We wanted to draw connections between the radical history of the Castro and current struggles for Black liberation. We wanted to reveal how silence and complicity align with state-sanctioned violence against Black queer and trans people. And it was clear Toad Hall was not on the freedom side. Our presence revealed the deep rifts between the movement for queer and trans people of color liberation—which is intimately entwined with the broader struggle for Black liberation—and white mainstream gay communities.

The hostility we faced has not deterred us. We will continue to make space for our mourning and resistance. And we will continue to challenge white-dominated LGBT institutions to recognize their role in this movement along the way.

QTPOC Liberation is a Bay Area based non-affiliated group of queer and trans people of color and mixed race folks acting in solidarity with Black-led groups such as Black Brunch, the Blackout Collective, and Black Lives Matter.
With the support of white allies, we #ShutDownCastro to mourn the many Black lives cut short by police and vigilante attacks, celebrate the resistance and vision of queer Black organizers, and take direct action against anti-Black violence.