In sixth grade, I started to envy certain girls’ hands. Not always manicured, but always neat. Fingers thin and smooth. These hands gently freed sheets of paper from their metal spirals and lifted loops of hair to more beautiful perches. Lunch trays floated inside their gentle grip while their wrists revealed a better angle at which to bend. I was in awe of how their hands held a gesture, how the art of suggestion flowed so freely through their finger bones.

Meanwhile, I rose up as the tallest girl in class. My arms sprouted thick hair. My hands, not hands, but paws. Heavily knuckled and tufted, the unwieldy things grabbed and pushed without charm. Though I tried to imitate the gentle motion of those I envied, my hands were bad actors. Their lies obvious.

Over the next two years, my heavy-handed habits resisted all efforts toward lightness while my torso learned the lies of the shoegazer’s curve: 5’10” could look like 5’4” and at 5’4” I could slip through the school halls unscathed by eyes both indifferent and cruel.

In every class that didn’t require my strict attention, my eyes dropped. Designs slipped from the margins of my notebooks – a maze of loops, scrolls and tangled vines – and onto my skin. Bone and flesh refused my favored curves, so I drew them on with pen. From the dip between index finger and thumb around to the more sliceable side of my wrist, I marked myself with ink. I dreamt of the day these marks could be transformed into tattoos and, with a single rude gesture, I could slip from the unbearably graceful embrace of polite society. And yet, each night before sitting down to dinner with my family, I scrubbed my hand clean, leaving nothing but a ghostly gray smear.

In college, ink was traded for film. Marred by the limitations of a lopsided tri-pod and desk-lamp lighting, I filled proof sheets with the unimpressive poses of my hands. But their acting skills remained weak, pretending coffee cups and novels were all they needed. Pretending air alone was enough of a caress.

Eventually, I looked to the trade of touch. If nothing else, my hands could hold a skill. My hands could be full, not with air but with aching bodies. On the first day of massage school, I sat with my class in a circle on the floor. A former banker took my hand in his and rubbed against the base of my palm as if counting out a stack of bills. I took his hand and smoothed against the base of each finger as if flipping the pages of a book.

Capitate and hamate. Scaphoid and Lunate. Phalange. Phalange. Metacarpal. I learned the puzzled bones of the palm; Bones that, when moved right, made people happy and made me a proper living.

Three years into that living, a client who worked for the weekly paper offered me a spot in the “Best of” issue. But instead of “Best Massage Therapist” she crowned me “Best Manhandler.” In a single, brief paragraph, the term “man-hands” was used twice. I was “naturally large-mitted” with “paws [that] are extraordinarily large and strong.” My massage was like “being groped by a very knowing King Kong.”

I tried to imagine the different set of envies my client might have harbored in her past. Perhaps, she’d been thwarted by the span of her tiny fingers or the abbreviated length of her stride. Maybe she’d craved the beauty of long bones the way I’d craved a delicate turn of wrist. Or maybe she’d coveted the fuller lips or brighter laughs of certain other girls. It’s even possible that other girls, in turn, once wished for my client’s wit or for my own sturdy height. No one escapes those early bruisings where we fail to make a fit. At least it helped to think so.

Call me what you want. I still had this: Held in the door of every blue newspaper box in the city that week was a photo of my hands. In the background was my face, small and bespectacled. In the forefront were my wide, well-lined palms, my briefly famous fingers. They looked ready. They reached forward, out toward the edge of the frame. 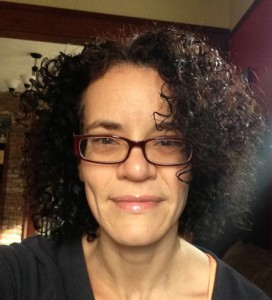 Tracy Burkholder’s writing has appeared in a number of journals including Silk Road, Pacific Review and The Portland Review. Her essay “Proof,” first published in The Cincinnati Review, was listed as a “Notable Essay” in Best American Essays 2013. She blogs weekly about doing something new she’s never done before at www.notuntilnow.wordpress.com. She lives in Portland, OR.