Editors’ Note (July 1, 2014): The Feminist Wire stands in solidarity with our sisters in Egypt.

On Saturday (June 21, 2014), Yara Sallam was arrested by Egyptian authorities while participating in a peaceful demonstration calling for the repeal of the Protest and Public Assembly Law (Law 107), which gives officials the discretion to ban any protest without justification. The law also allows police officers to forcibly disperse any protest, and sets heavy prison sentences for peaceful protest and expression. Yara was arrested along with six other women: Sanaa Seif, Hanan Mustafa Mohamed, Salwa Mihriz, Samar Ibrahim, Nahid Sherif (known as Nahid Bebo), Fikreya Mohamed (known as Rania El-Sheikh), and 15 other activists. 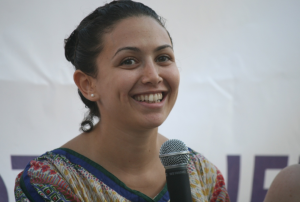 Yara Sallam is the Women Human Rights Defenders Program manager at Nazra for Feminist Studies, the first program in Egypt that focuses on women human rights defenders.  Yara previously worked as a professional legal assistant at the African Commission on Human and Peoples’ Rights (ACHPR) in The Gambia, as researcher on Freedom of Religion and Belief at the Egyptian Initiative for Personal Rights (EIPR), and as a research assistant at the Institute of Research for Development (IRD) focusing on women’s rights in Egypt. Yara has earned two degrees in law – a Licence of Law from Cairo University in Egypt and Maîtrise of Commercial Law from Paris I University Pantheon Sorbonne in France. She has also been awarded a Master of Laws degree in International Human Rights Law from the Law School of Notre Dame University in the United States of America.

TFW: How did you come to feminism and how do you feel it is defined in your life and activism?

Yara: The first time I read about feminism as a theory was in 2010 while I was doing my master’s degree, but I didn’t need to read the theories and the books to practice feminism. I was lucky to be raised in a leftist family that believes in equality between men and women, and applies these values. My mother is, by anyone’s definition, indeed a feminist, but still refuses to call herself one because of the negative connotations associated with who is a “feminist” and whether this implies an aggression toward men. For me, growing up seeing a strong woman like my mother, who fought her own battles bravely in the public sphere, struggled while growing up, takes strong stands in her personal life despite social stigmas, is what inspired me and made me the feminist I am today. She taught me about feminism in her day-to-day struggle, and I will be grateful for her all my life.

When I started my master’s degree, I knew I wanted to do my thesis on women, and this started my interest in working on women’s issues. Although my work at Nazra for Feminist Studies came by coincidence, I have found myself in a place that is really motivating and inspiring. Working in Nazra, has taught me what it means to work collectively for one purpose, in different ways, and is a practical example of what feminism means and how people can use their passion and believe in feminism on the ground to help push for change.

TFW: You have been very much involved in the uprisings in Egypt and the change processes since the overthrow of Mubarak.  What do you see as the opportunities and challenges for feminist gains in Egypt?

Yara: The start of the revolution in January 2011 opened up many opportunities for women to be present in the public sphere and participate in the struggle for democracy and human rights. Even though many women who are active at the moment, in different revolutionary groups or political parties or independently, do not necessarily consider themselves feminists, but – as my friend Mozn puts it – their mere presence in the public sphere, challenging traditional views about women’s role in the society, is a gain for the feminist movement. Women are shaping new grounds for their participation in politics, human rights defence and revolutionary actions, which cannot be taken from them anymore.

The challenges that we as feminists are facing is the rise of a new dictatorship, the same way as with the previous regime of Mubarak, only with a religious interface and with a conservative approach that is not very smart. Not only do we have a government that does not bear its responsibility for human rights violations, including violence against women rising to the extent of rape with sharp weapons in Tahrir Square, but also allows statements from officials blaming women for the sexual assault. The current regime is also re-establishing ‘state feminism’ (which was present during Mubarak) by using female figures from the Freedom and Justice Party to attack women’s rights and feminists. The struggle continues, not only against the regime, but also with civil groups who are not convinced of the importance to push for women’s inclusion in the public sphere, though it’s the first time there are real political parties competing for real elections.

TFW: On February 12, there was a global day of action against sexual terrorism and in solidarity with the women of Egypt.  Can you tell us more about why this has become necessary and what type of solidarity feminists in Africa and across the globe can show to Egyptian sisters?

Yara: The Global Protest Against Sexual Terrorism Practiced on Egyptian Female Protestors was a call for solidarity by a Facebook page called “The Uprising of Women in the Arab World” which has been doing online campaigning to raise awareness and gather support for women in the Arab world. I believe with the uprisings everywhere, not only in the Arab world, solidarity between people around the world, especially feminist movements, is crucial. Solidarity is not only important in terms of having a collective feeling of support that we are all fighting for the same cause, to end patriarchy, but also because we all know different tools and have different skills. What African feminists, and other feminists across the globe, can do is to pressure the Egyptian government (through sending urgent appeals, hold protests or other forms of pressure) to let them know that there are other feminists watching out for their sisters and supporting them. Another important aspect is that we all need to learn from each other, I believe that we in Egypt have a lot to learn from our African sisters, and also from the experience of other feminists, like in Latin America, about tools they used, and success and failure stories.

TFW: As a lawyer, how do you see the role of the law in ending patriarchy and sexist oppression in Egypt and more broadly in the rest of Africa?

Yara: I believe law is one of the tools patriarchy uses to control women’s sexuality, personal choices, and mobility. Feminists in Egypt, and across Africa, should engage with legislators in the process of issuing laws and ensure that a gender perspective is always taken into account.  Feminists must also fight against laws that reinforce the traditional roles of women in society and patriarchal values that we have in the Arab and African societies, which are being translated into laws.

TFW: You firmly define yourself as an African. Why do you claim this identity and how does this identity inform your feminism and your activism?

I was always annoyed by the fact that many Egyptians do not consider themselves African, although we are, but it wasn’t till I lived in The Gambia for a couple of months that I learnt why I consider myself African, and why I feel connected. I can’t really explain how I feel, but there is something in the collective sense, the appreciation of family, the roots, the ancestors, the diversity, the music, the dance, and everything in between that makes me feel more at home than anywhere else I’ve been to. This sense of belonging to one community and one continent, Africa, is the same way I feel about feminism, that we are in the same struggle together, and that solidarity is much needed in this struggle. Being an African Feminist to me means that I understand the difference that we have as individuals but still work collectively for one purpose, respecting everyone’s culture, and cherish the way we all complement each other.

TFW: In Egypt, where most of the population claim an active faith and the majority of people claim Islam as their faith, where do you see the relationship between religion and feminism and what efforts are being used to combat patriarchy through feminist interpretations of religious script, if any?

Personally, I do believe that each one of us should use the tools she or he believes in, and it’s only fair to give the same right to feminists who want to engage in reform for the religions they believe in, whether this would be Islam or another religion. In a country such as Egypt, I believe it is important for Islamic feminists to engage with the mainstream religious discourse, and challenge the idea that it represents Islam, and that it’s the only credible religious opinion – when you can speak their language, it’s easier to break their arguments.  However, I think it would be harmful to keep the feminist discourse only Islamic, I believe that secular feminists should also help shift the discourse into a non-religious one.