Kara Walker and the Sweet Taste of Gentrification – The Feminist Wire

Home / Activism / Kara Walker and the Sweet Taste of Gentrification

Kara Walker and the Sweet Taste of Gentrification 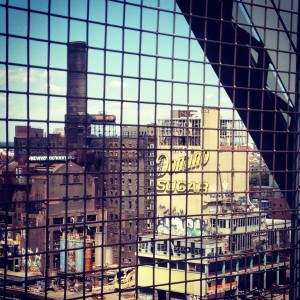 View of the Domino Factory from the Williamsburg Bridge.

Many of these NYC neighborhoods were vibrant communities for people of color before the (mostly white) artists arrived.  But with the white folks comes perceived (white) safety.  Then comes the real money, the development, the condos.  Alphabet City and the East Village and the LES.  Dumbo, Chelsea, and Hell’s Kitchen. Then Williamsburg. Now Bushwick, now South Harlem (SoHa), now Crown Heights, now eyes even on the South Bronx (SoBro). The word gentrification seems to be on everyone’s lips, even as the force it describes continues to violently displace people from neighborhoods they can no longer afford.

Williamsburg, a symbol both of gentrification and of everything celebrated and sold and derided as hipster, seems a lost cause. Starving artists can’t afford it anymore, anyway. It’s filled with bankers and tourists. And still, sometimes, with art. 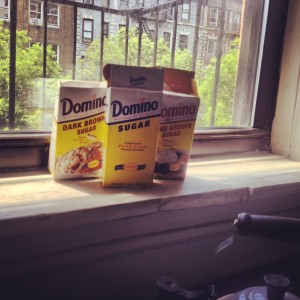 A Subtlety or The Marvelous Sugar Baby, an Homage to the unpaid and overworked Artisans who have refined our Sweet tastes from the cane fields to the Kitchens of the New World on the Occasion of the demolition of the Domino Sugar Refining Plant

is situated not only in the heart of this symbolic neighborhood but within one of its most contested sites. The former Domino Sugar Factor once produced most of the sugar in the world. It is a massive complex of buildings that until 2004 processed this staple crop that is now mostly produced in Brazil and India. The Domino factory will be replaced with luxury condos. The mock ups by the development company, Two Trees, look, to my eyes, horrendous, replacing brick and metal with shiny structured glass – replacing something singular, a monument to history and harm and money, with a lived-in monument to a different type of wealth, a 21st century type of wealth, a new colonial project on the shores of the East River. 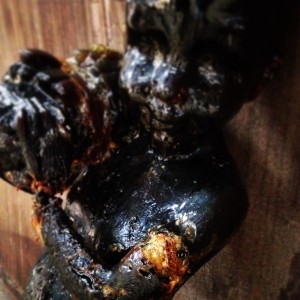 And so, the art, but that has been written about already, and well [1].  The sphinx.  Holy shit, it glows in the space, it is present, it demands to been seen and considered.  Yes, it is made in white sugar, which Walker says was both an aesthetic choice (the space is so dark) [2] and a comment on the sugar refinement process and the purity of all things white.  As interesting are the children, dark and covered in dripping molasses that evokes blood.  They’re beginning to fall apart, off-white flesh visible under their saturated brown skin.  Many of the babies are holding baskets that act as offerings; the baskets are full of goodies – bits of sugar, masks, molasses – that are melting, becoming unrecognizable.  It is violent, bloody, destructive.

And others have written about the white gaze that pervades the space, and well [3].  It is remarkable, seemingly unavoidable, that the mostly white audience gawks at these small black figures, gets close, takes photos, comments, laughs, talks. Except most of the white viewers don’t seem to notice that they are looking at the figures of black children (slaves?) just as actual black children were once objects of a white gaze in European zoos (into the 1950s, apparently [4]).

Left: A black child in a Belgian Zoo in 1958 from [4]. Right: Kara Walker Domino Factory installation (image by the author).

Most white people know that actual black bodies should not be gawked at like this in a “post-racial” society. But black art can be used as proxy.

The white audience (myself included) becomes part of the installation, proving that (even liberal) white people are still interested in the consumption of black bodies without engaging the past and present violence of our gaze.  And there is a connection between this superficial engagement with ‘the other,’ the commodification of art and people alike, and our ability to move into (colonize?) neighborhoods that are not our own. 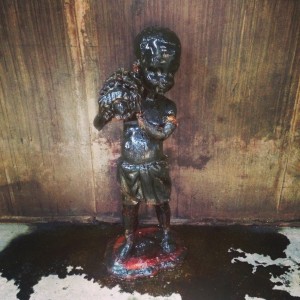 The use of sugar in this high art and public installation is indeed stunning. It is cold inside the Domino factory, and dark, and it smells sweet and old. It feels a certain type of way, full of ghosts, maybe. The use of sugar in art might be novel and evoke a history too often ignored, but I heard some of my favorite writers whispering in my ear the entire time I was in the factory. Diaz and Dandicat; Glissant and Chamoiseau: they lived in and reckoned with the history of our sweet tooth, with lives and deaths on islands and in fields.

Sugar has been and is still violent, it has been and is still colonial, and the building literally bleeds sugar from its walls. The Domino factory connected slavery in the Caribbean to industrial work in the north to domestic work across the world. The factory was a site of labor, life and death, and of struggle for workers’ rights. And all that (colonialism excepted) is going away and the walls of the condos will certainly not bleed molasses or anything else. 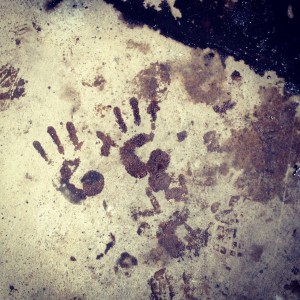 The site itself is an interesting comment on the changing global economy, and Walker’s public exhibition, her first, a potential act of resistance.  Deindustrialization has shuttered factories across the country, the world.  Unionized industrial labor has been replaced with a service economy. And Williamsburg is a exemplary location: coffee shops and bars and restaurants and clubs and housing make up the economy replacing Domino, our four dollar cupcakes and $5.50 iced coffees almost certainly sweetened with sugar that would have once been refined just here, right here. Domino is, for a moment, a free and public space, full of art and life, before it becomes a paragon of our new economy.  Walker helps to invite us inside, asks us to consider her vision of the past, an alternative future. My friends and I talked, as we stood outside waiting, about what an amazing site the factory would be for a permanent gallery that asked artists to engage with race, class, geography, industrialization and late capitalism. 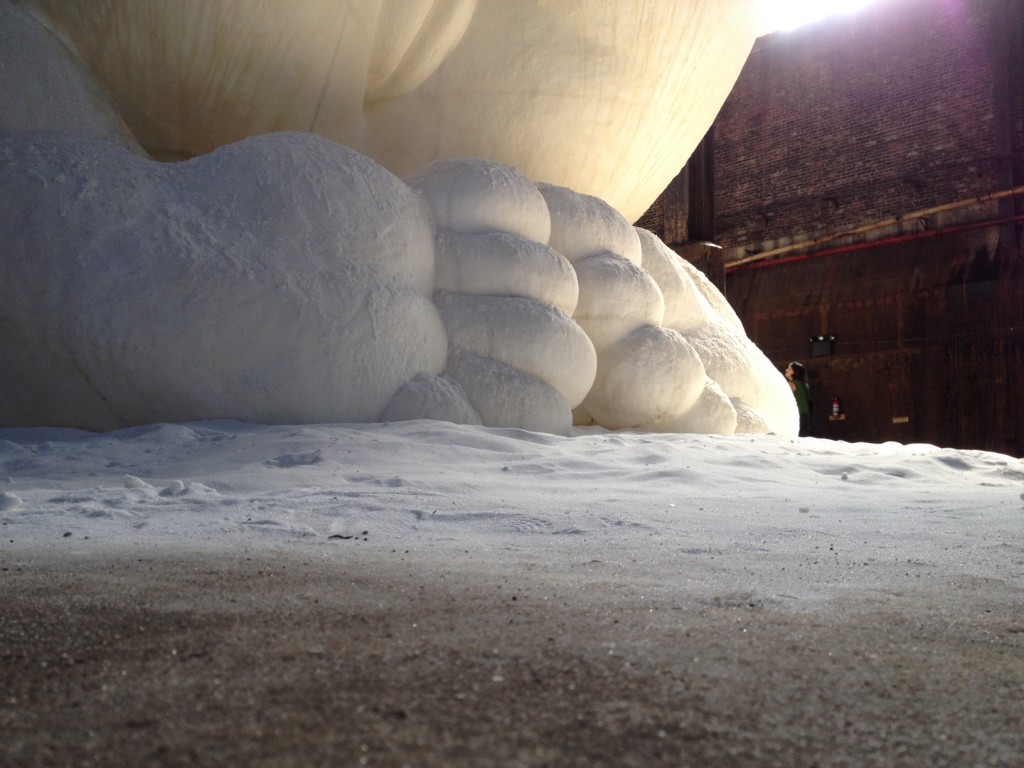 It must be noted that a large portion of the financing for this massive project came from Domino itself in the form of 80 tons of sugar, 40 of which went unused, but also (mostly?) from Two Trees, the company developing the site.  The ship of gentrification has sailed already through Williamsburg, but we cannot ignore how art and artists have been used to speed development in neighborhoods throughout this city. Is Kara a willing participant? Is her installation being used to sanitize the coming destruction, to act as advertising for the condos to be sold? Is the blackness she makes so evident, so raw, being viewed as spectacle? Or is she using her large voice and this sweet opportunity to speak some of her own truths?  To make us (her largely white audience) reconsider ours? She says she thinks the destruction of this site “makes her very sad” and is “inevitable but it’s tragic.” [5] Black and brown bodies were used and discarded for the production of sugar; now black and brown bodies are being displaced for the production of wealth, of housing.  Two Trees had a recent spat with the New York mayor’s office over the size and number of affordable housing units in the future Domino Factory buildings [6]; a friend of mine who works at City Hall described the fight as political theater.  DeBlasio knows, apparently, on which side his bread is buttered in terms of the real estate dollars he needed to get into office in the first place.  And so it goes. 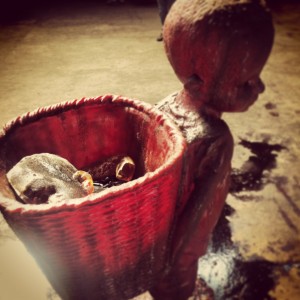 The world moves on. Neighborhoods change.  The sphinx and the sugar babies will go down with the Domino Factory. Art can be resistance, but against forces like these resistance can feel futile. I left that building feeling ripped open, torn apart.  At least we got to see the blood, the sugar, the molasses, the bodies (black) in that sweet sugar; at least we considered our history, the world we have made and in which we live, one more time before this site goes boom, and the condos take their if not rightful, at least inevitable, place.

The Kara Walker installation at the Domino Sugar Factory in Williamsburg is free and open to the public Friday (4-8p), and Saturday and Sunday (12-6p).  More information is available here. 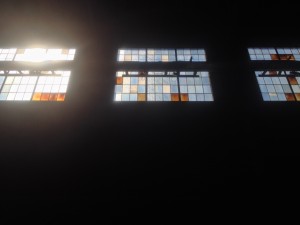