Decolonial Intersectionality and a Transnational Feminist Movement – The Feminist Wire 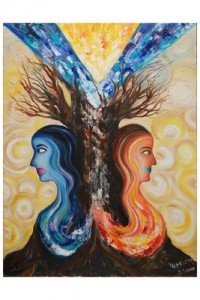 Transnational solidarity among feminists has often been a difficult goal to achieve because of the continued dominance of Western feminism, the lack of self-reflexivity on the part of feminists, and the lack of an approach that addresses both the complexities and nuances of lived gender experiences as well as the ways in which imperialism continues to structure the lives of millions around the world. In this article I want to address the points of convergence between intersectionality and decolonial theory and suggest that combining these two approaches can help in developing a non-exclusionary transnational solidarity.

Angela Davis’ essay on her trip to Egypt in 1985[1] is a seminal work on the subject of transnational feminist solidarity. The essay contains reflections on the different visits and experiences she had on the short trip, and includes a wealth of emotional responses to the feminists she met. Two things are notable about this text: 1) the ways that Davis approached the question of feminism in Egypt, and the multiple moments during her trip where she forced herself to question her own assumptions rather than rely on stereotypical narratives (prevalent especially in American media and academia) about the realities of the women and men she was meeting, is of utmost importance. This humbleness and self-reflexivity suggests that a transnational feminist solidarity is possible, albeit not easy. The second thing that is notable is the location of Davis as a Western woman in Egypt, despite her being African-American. This brought to light the complexity of subjectivities within the global feminist movement, as well as questions of solidarity and understanding. While within the U.S. she was clearly part of a marginal group, in Egypt this positionality was a privileged one, as she represented the U.S., a country implicated in Egypt’s “underdevelopment.” Thus, her positionality changed from one location to another, emphasizing the importance of positioning oneself within structures of power in specific locations. Her experience allows us to unpack the question of positionality, particularly in relation to the question of feminist solidarity.

As a movement, Western feminism continues to largely exist in a tense power relationship with other forms of feminism, largely because the movement continues to be based on liberal assumptions that simply cannot be used in feminist praxis in other contexts. In the words of Audre Lorde, “the master’s tools will not dismantle the master’s house.”

For women outside of privileged locations in the West where neoliberal imperialism continues to play a large role in producing and reproducing patriarchy, concepts that have their history in imperial centres are seen as unlikely to act as tools for meaningful change. This is why an intersectional approach needs to be combined with a decolonial framework.[2]

How to overcome this? Intersectionality is certainly one solution: applied as both theory and praxis, intersectionality could prove useful in bringing to light power dynamics, even if unable to transform them in the short term. It is useful to question, however, whether intersectionality goes deep enough in challenging the Western bias of many feminists across the postcolonial world today. It is not a coincidence that in many postcolonial settings it is feminists who hold liberal and Western conceptions of gender relations that receive the most publicity and funding. This is a way of maintaining hegemony in a ‘post-colonial’ world and thus ensuring that the ‘post’ never materializes. While intersectionality may convince feminists of the need to de-centre their assumptions and look at multiple structures and experiences, I believe it needs to be coupled with a decolonial approach to truly transform the liberal Western underpinnings of much feminism activism today.

A decolonial approach would necessitate moving past the individualistic liberal ontology underpinning much of feminism today, including some strands of intersectionality. This entails problematizing the assumption that the subject is always erased from the analysis, thus producing a myth about universal and objective knowledge. Instead, “critical border thinking” can be employed, which is a form of subaltern epistemology that does not hide the epistemic positionality of the subject speaking.[5] This allows for decolonial interpretative communities to be produced that challenge Western notions of universality, neutrality and linear evolution. By critically deconstructing Western concepts and structures that have been normalized, the first step towards dismantling them has been taken.[6]

One example of such an approach would be to conceptualize feminism as a project that views patriarchy as a system that constructs both women and men in harmful ways. Rather than view gender justice as an individualistic goal to be attained by every woman – a view that sometimes views men as “the enemy” –alternative visions in which patriarchy is conceptualized as a system that oppresses everyone can be more useful. This is not to say that men do not benefit from patriarchy – all men do. Rather it is to complicate ideas of masculinity by showing that not all men benefit equally. Work on masculinities has shown that men who fit the ideal type are in a power relation not only with women but also with men who are outside of what is considered “masculine.” Pushing this conceptualization further, it is also more applicable to societies in which individualism is not the norm. For many women in postcolonial societies, the aim is not to challenge men, but rather to challenge the system and structures that allow men to become dominant. There can be no feminism without anti-imperialism, anti-capitalism, and so on, because patriarchy does not exist in isolation from imperialism, capitalism and other structures.

Another way to employ an intersectional decolonial approach is by deeply interrogating the categories and notions of oppression we use. Rather than assume that we know what harms women, we should let the intersectional categories emerge from the cases and contexts themselves, bearing in mind global structures of inequality. To think of an obvious example, in the case of Arab women it is almost always assumed that “culture” (already a problematic homogenous designation) is somehow implicated in the oppression of women. Not only does this essentialize “culture,” it also isolates it as something problematic that needs to be fixed. This ignores the possibility of Arab women using cultured notions as a means of fighting oppression. It also fixates on culture at the expense of other relations or structures such as class. Constructing “culture” as a barrier to women’s personal freedom reveals a liberal conception of the human subject, where liberty – at a personal, individual level – is framed as especially important and as the direct result of the elimination of cultural practices, without taking into account the political, economic and social factors that are affected by both local and global factors.

A final example relates to praxis. Allowing the context to determine the categories[7] we use in gender analysis through an employment of critical border thinking will also impact the ways in which we practice feminism. Once the ‘problems’ are framed differently, it becomes clear that forms of feminist praxis are needed. For example, moving away from an individualistic liberal framing will show that taken-for-granted solutions to gender inequality such as education or employment at the micro-level are not value-free. A decolonial approach would press us to question what we mean by education, which types of knowledges this understanding privileges, and how providing education and employment to women in the Global South also has multiple structural effects that often remain understudied, most notably that it ties them into a global capitalist economy of production and consumption in which they face a new set of oppressive relations. As Lila Abu Lughod has cautioned, not all employment is “good for women.”[8] Intersectionality as an approach may help us understand that employment does not necessarily ensure a woman’s well-being, but a decolonial approach would explain why that is and how specific structures are implicated in the production of particular ways of knowing and surviving in the global economy today.

Returning to Angela Davis – her reflections on her trip to Egypt serve as a reminder of how difficult any kind of transnational solidarity is. Her discussions also show, however, that self-reflexivity is essential to solidarity, and that engaging in a constant process of self-questioning as well as positioning oneself within structures is necessary if one is to bridge contexts without imposing one’s own location and subjectivity. For feminism to undergo the process Davis underwent, adopting a decolonial approach that de-centres Eurocentric ideas about feminism and favors multiple processes of knowledge production seems to be the most promising way forward at this juncture. Until intersectionality as an approach employs decolonial assumptions, the risk of the continued privileging of western assumptions is high. This is particularly the case when intersectionality becomes a means of reifying identity politics rather than a tool that destabilizes categories. This in turn means that feminist activism and praxis will continue to be fraught with contradictions between a western universal project and the complex nature of contextual particularities. A decolonial approach that is intersectional and unapologetically subaltern will allow use to approach the intersections of categories that emerge from the given context and that are defined by those who experience the realities of those intersections. This may mean that categories such as class, race, sexuality, and even gender don’t mean what intersectionality theorists think they mean, or don’t intersect in the ways previously assumed, and this is precisely where self-reflexivity comes in. In other words, we should all, as feminists committed to knowledge production, have our Angela Davis moments and ask whether we have really decolonized our own knowledge and whether our interventions are impositions rather than attempts to create transnational solidarity.

Sara Salem is a PhD researcher at the Institute of Social Studies in the Netherlands. Her work focuses on historical and institutional perspectives on political economy, and centers specifically on the recent wave of uprisings across the Middle East and North Africa. Her interests include decolonial theory, third world feminism, critical political economy, and theories of post-development. She has lived in Zambia, Egypt, and the Netherlands, and is especially interested in Southern Africa and the Middle East, and formulating new forms of knowledges through decolonizing discourses that were naturalized through colonial processes. She has worked at numerous NGOs in Cairo, mainly on issues of political participation and gender. Follow her on twitter @saramsalem

Feminist critique and Islamic feminism: the question of intersectionality –http://postcolonialist.com/civil-discourse/feminist-critique-and-islamic-feminism-the-question-of-intersectionality/

[4] There are also many networks online, but again this tends to be elitist as it excludes those who do not have Internet access.

[6] This is not to suggest that all scholars using intersectionality are Eurocentric; indeed many already actively employ a decolonial approach. Nevertheless, for others intersectionality constitutes an ‘add and stir’ approach that reproduces individualistic identity politics and it is this that my critique is aimed at.

[7] A further step would be to push for a view of categories that is much more fluid in order to avoid concretizing identities rather than seeing them as relational.