My feminism and my love of football have a complicated relationship.

When I was eight and watching Dave Krieg, Steve Largent, and my beloved Seattle Seahawks, I dreamed of being the first female player in the NFL.  It felt unjust to me that no women were allowed in, and I wanted to be the first.

My ever-supportive mother suggested I could one day be a kicker on my high school football team. She said she’d heard of that once for a girl. But kicking field goals did not look nearly as fun as doing what Largent did.

By 10-years-old, I had accepted fact that I would never be a wide receiver for the Hawks. I was just too small.  Honestly, I didn’t feel as though the problem was because I was a girl or had a vagina. I felt the problem was I was very small in stature, even if I prided myself on being stronger than almost every boy in my class but one (And I was—I could do 20 chin ups in 5th grade.)

Not to be entirely deterred from dreaming, I set my sights on being the first female coach in the NFL.

But this dream died by my early teenage years, in part because I intuitively realized—learning as we do about patriarchy at a young age— that male athletes in the NFL would never respect a female coach.

Now, 20 years later, what I actually do for a living is quite different from what I dreamed up while cheering Dave Krieg’s come from behind victories, like this vintage 1990 beauty at Arrowhead.  (My favorite game, ever, mind you.)

All grown up, I am now a professional feminist. I write, teach, and study about gender. “Gender” is a big topic to tackle, a much more complicated game than you might at first think. Gender has a lot of interrelated components—like race, sexuality, class, nationalism, and religion. What feminist theorists like myself study is how gender is constructed as a big complicated knot of cultural values and histories. We feminist theorists call this complicated knot “intersectionality.”

Being a feminist for a living is emotionally exhausting work because we spend a lot of time analyzing injustice in this intersectional matrix. We see violence in places others don’t, because we are trained to see it.  We see the violence that gets normalized so much that it is dissociated from many people’s conscious thinking.

So, as you might imagine, there are certain complications with loving football as I do and being a professional feminist.

Furthermore, there are no out gay players in the NFL. This says something about the kinds of masculinities and sexualities policed in the NFL.

Also, the NFL still condones having a team with a racist name, a term imbedded in histories of western colonialism and genocide of Native Americans.

The NFL also objectifies women, and has a complex, if not a straightforward, relationship with a larger culture of domestic violence in the U.S. Read scholar David J. Leonard’s work on the Super Bowl and domestic violence for more on this issue.

And I haven’t even begun to talk about rape culture and their connection to college and high school football teams.

In short, there is quite a bit for a professional feminist like myself not to like about football.

But I still like it. And that’s the bind.

When you do what I do as a career, you have to think about how you yourself are perpetuating violent structures.  I know that football reflects larger, intersectional systems of violence, and this fact troubles me. A lot.

But I still can’t wait for this weekend’s NFC championship game between the Seattle Seahawks and the San Francisco 49ers. I will probably even lose sleep with excitement as the game approaches. The 12th Man/Woman is in awe of what our team is accomplishing with their talent, passion, and hard work. We are so damn proud of all of them. Something truly magical is happening in Seattle right now.

Every Sunday, I know that my team inspires me to live more fully into my dreams, to take my own goals up a notch to achieve that next level of play. I’d argue my love for the Hawks even inspires me to be a better person. How the heck can I say that after everything I have already said?

Because when you grow up with football, when you love football, and when you deeply appreciate the game, you don’t only see the violence and the problems embedded in the industry. You also see a kind of teamwork, artistry, and perseverance that is simply stunning.

There are plays I watched years ago that took my breath away and they still shape how I approach life.

For instance, before Krieg threw this epic game winner to Skansi on the last play of the game, he had been sacked seven times by Derrick Thomas, which remains an NFL record. While being threatened with an eighth sack, he somehow found some room to operate, creating a miracle in the final seconds. Lesson: If you can keep believing amidst adversity, you can create something incredible. So keep believing in yourself and others. This truth has stuck with me since I watched that play at 10-years-old.

Fast-forward with me in the highlight real. What Seahawks’ fan can resist savoring replays of Marshawn Lynch’s famous 2011 playoff run? Lynch’s desire for the end zone is indomitable, but also watch how the entire offense makes those 67 yards happen. Lesson: Want it more. Also, your job on a play isn’t done until the whistle blows. There’s always something else you can do to be a contributing teammate and create success.

In this current season, I am now tantalized by replays of Doug Baldwin’s receptions. His concentration, footwork, and awareness of where his body is on the field blow my mind. That 32 teams in the NFL draft overlooked him inspires my own career as a scholar, because it reminds me of my own frustrating process of getting into a top PhD program (the academic’s version of the draft). It’s that feeling of knowing you are good enough, and that you have more heart and hard work in the game than most, but you are getting passed by again and again. And sometimes you are angry, but you let that anger fuel you toward precision, excellence, and positive energy.

I love this whole messy process of going after one’s dreams. And thus when I watch Baldwin do what he does, I know I am becoming more courageous, and thus better, at what I do, too. A gutsy receiver makes me a better feminist theorist. And yes, I know this confession is full of contradictions. 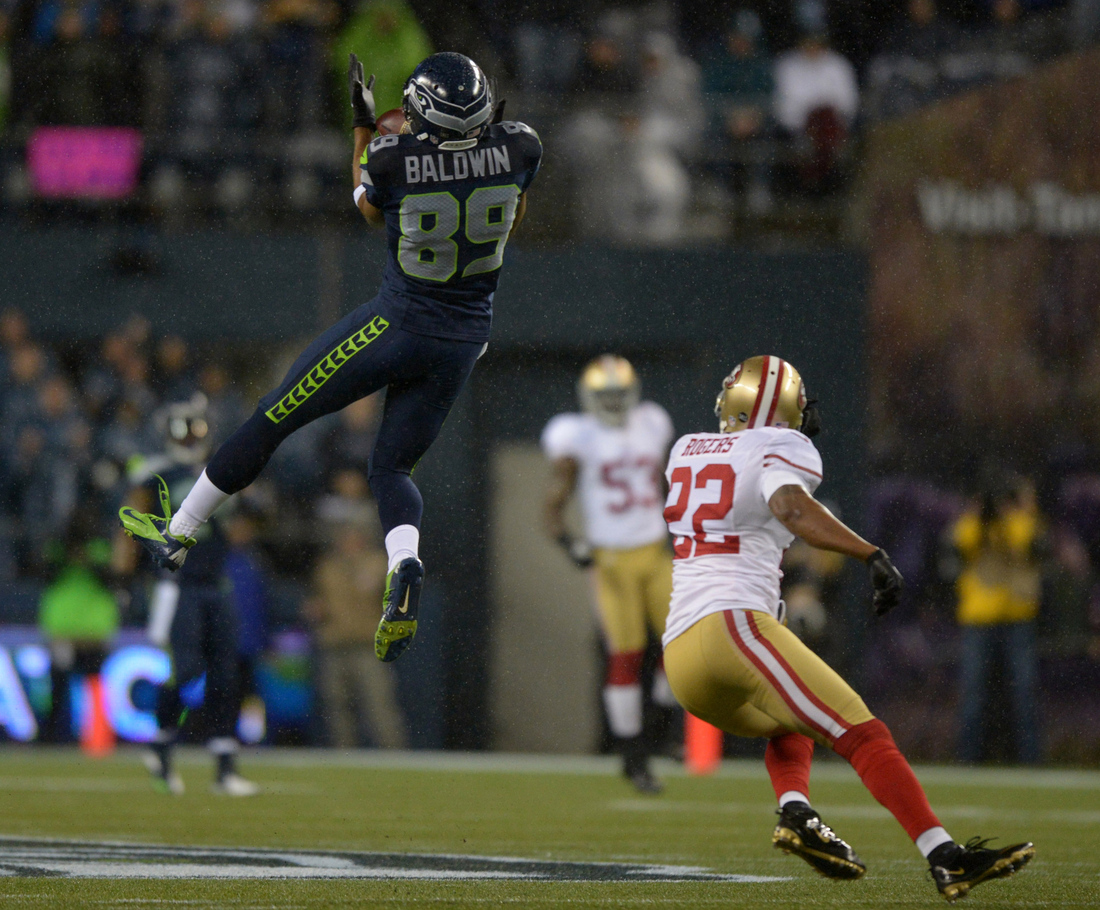 I have a tentative relationship with “outing” myself as a football lover. It feels as though I will lose my feminist street cred. But, I also think the reality is that we all live these kinds of contradictions everyday, and it’s better to start to name them and sort through them than pretend we aren’t all that contradictory.

You see, I am against the exploitation of women in the textile industry, but I wear clothes made in sweatshops. I am against fighting wars over oil, but I drive a car. I am against exploiting minerals and perpetuating wars in the Congo to build Macbooks, but I write this essay on one. I am against western colonialism, and I am a white settler, living on land violently stolen from First Nations peoples.

And yes, I watch football and I am against the NFL exploiting bodies for profit, and not taking seriously what concussions do to human brains and lives. I am glad Hawks’ owner Paul Allen is funding research on how blows to the head affect the brain, and I hope for real change in the NFL in the future. I am not asking for flag football here, but there is too much violence, particularly too many head-to-head injuries.

My knowledge of the game’s problems, though, doesn’t mean that I don’t love this game.  It does, though, put me in a position of asking about my responsibility as a fan. How can we be part of the positive changes the game needs? How can we support our players in living full, healthy lives? How can we not objectify athletes?

On Sunday afternoon, I will watch the 49ers play the Seahawks, two of the most physical teams in the NFL, and these questions will certainly be in my mind.

But I will also be celebrating what my Hawks have accomplished in this tremendous 2013–14 season. I will be in awe of the synergy in our secondary. I will catch my breath when our offensive line sets up Lynch’s running game. And I will be especially rooting for players like Baldwin to keep showing us how much smarter and more courageous they are than all the gatekeepers who told them “no.”

I will still let football inspire me. 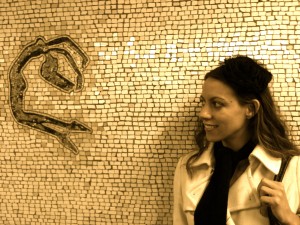 Kimberly B. George is a creative and academic writer, a cultural critic, and a PhD student in Gender, Race, Sexuality, and Social Justice at the University of British Columbia. She most recently earned an MA in American religious history at Yale University, where she was a Merit Scholar. In addition to her life as an academic, she is also an entrepreneur who teaches online adult education classes in creative and academic writing, as well as feminist theory. Her writing has appeared in The Washington Spectator, The New Haven Advocate, Feministing, and The OpEd Project’s Byline Blog, among other publications.

Related ItemsfeminismFootballMasculinityNational Football LeagueNFLSan Francisco 49ersSeattle Seahawks
← Previous Story COLLEGE FEMINISMS: My Intersectional Take on Marriage “Equality”
Next Story → How I Use Pinterest To Explore the Difficulties of Violence Against Black Women and Girls