Cognitively Accessible Language (Why We Should Care) – The Feminist Wire

Home / Academia / Cognitively Accessible Language (Why We Should Care)

Cognitively Accessible Language (Why We Should Care)

If you use plain language to describe and discuss even complex theories, more people will be able to read your writing. Not everyone will believe this is a good thing. There are historical reasons for this, and some of these reasons are compelling in the lives of people living and working in today’s economy.

In terms of access and justice, using plain language is very important. It’s needed to allow the widest variety of people with disabilities to participate in conversations about themselves. We cannot allow certain disabilities to stand in for others. Neurodivergent people (those of us whose brains are wired differently), for example, have different access needs from one another and from people whose access needs are orthopedic or purely sensory.  First we must understand some more about some of the potential barriers if we are to make progress solving these access barriers.

In the academic job market, it is very difficult to get published when you write in a tone of voice, or what writing teachers call “register,” that most folks can pick up,  read, and easily understand. One reason for this difficulty is the custom of “double-blind peer reviews” in which the names are taken off papers and you are not told who reviews your work.

What happens is that in-group languages, jargons, and other forms of writing that block out a lot of people from being able to read texts written by academic specialists also serve to mark the writers as belonging to special subgroups or schools of thought. These language differences are a quick way of showing the reader that the writer is a legitimate member of the system. Not only that, but an experienced reviewer can pinpoint almost exactly who the writer is, if not precisely who, by looking first at the language and then at the other writers cited and the topic of the paper combined with the language information.

When the reviewers send notes back to the original writers, the writers can tell fairly easily  who reviewed their papers, if they want to, based on the commentaries, which will be written in a similar or adjacent form of jargon, and might say certain experts or methods needed to have been included or so forth, which tips you off to their subgroups. Then you can look them up on a list within the journal’s information and easily find out exactly which person they are based on their interests.

Writing in plain language makes all of this nearly impossible and marks you as an outsider. That’s part of why we do not see it happen more often in certain fields of academic activity. People are afraid they will not get published at all.

This is just the tip of the iceberg. Writing academic scholarship in ways that allow more people to gain access to it is also beneficial when we are talking about economic justice. It is useful in cases of English as a second language, and it is useful when we are talking about people who are brilliant thinkers and organizers but for whatever reason (frequently economic) have not had the time (or money) to learn the language systems of academic jargon.

So in terms of disability, there is the saying: “Nothing About Us Without Us.” When we write about other people, especially in language they have no chance of picking up and reading, let alone writing in themselves and seeing their own voices in print, we are perpetuating a gross injustice.

In terms of economics and classism, as well as other forms of access barriers, similar problems arise. From a feminist standpoint, I think it is quite clear that we would want more people to have access to the tools and social capital that would enable the movement to go forward. We want people to be included rather than locked out.

We as academics and even some quasi-academics in the publishing world know how the systems of jargon and in-group language work. I think it’s time to take a stand against that sort of thing now. The more we rise up against it together, the more chance we have of creating a critical mass of solidarity that allows more people to write in their natural voices, enabling more and more people access to the keys to the tower. We won’t even be the first to have the idea: Randall Munroe may have been speaking about higher math when he suggested simpler language would be helpful in academia, but it applies even more when we’re talking about real people whose lives can be affected by what’s written about them. It is risky to be among the first to actually implement a good idea, but feminism has a tradition of taking on righteous risk. 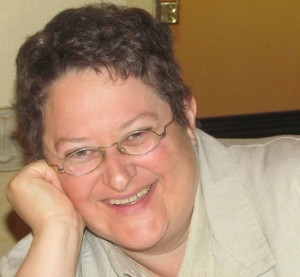 Autistic scholar and activist Elizabeth J. (Ibby) Grace holds a position as Assistant Professor of Education at National Louis University. She blogs at tinygracenotes.blogspot.com and NeuroQueer.blogspot.com, and her writing can also be found among other places at Thinking Person’s Guide to Autism and in a chapter on her own schooling for the newly published book Both Sides of the Table: Autoethnographies of Educators Learning and Teaching With/In [Dis]ability, edited by Phil Smith and available at Amazon. She lives in the suburbs of Chicago with her lovely wife and two magnificent sons going on 2, where she serves on the board of directors for the youth group Special Gifts Theatre.