Secular Woman of the Year – The Feminist Wire

Home / TFW in the World / Secular Woman of the Year

Secular Woman of the Year 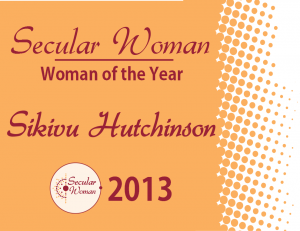 Writing about the urgency of male feminist activism on his blog, Ian argues that: “There is an important dual role that male anti-misogynists (a.k.a. feminists) can play in this fight: first, we can exploit the amplification of our voices that our male privilege (however unintentionally-gained it may have been) affords us to put women and their voices front and centre in discussions where they might otherwise be absent, and secondly we can speak to the ways in which patriarchy harms men and boys. We have a part, beyond simply listening and absorbing, to play in the struggle for equality.”

Secular Woman, which is led by feminist activist Kim Rippere and powered by wonderful members like Monette Richards and Nicole Harris, recently launched a campaign aimed at reducing abortion stigma called Shameless, provides resources for secular women, and supports the work of humanist youth programs like my South L.A.-based Women’s Leadership Project for girls of color.