Talkback: In Defense of Rihanna – The Feminist Wire

Talkback: In Defense of Rihanna 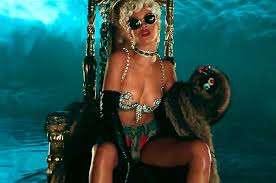 The hugely delayed video for Rihanna’s single ‘Pour It Up’ has received undue amounts of negative attention since it dropped a couple weeks ago. Initially slated to be hosted on Vevo, ‘Pour It Up’ was actually taken down right after it was posted (within about a half hour) due to backlash against its “explicit content.” Vevo then asked Rihanna for a censored version, which she provided. The censored version of the video has since been reinstated to the site. Most — if not all — of the critiques that have been made in the media are centred around the fact that the video features a very scantily-clad Rihanna twerking atop a throne, twerking in shallow water, and yes, twerking on a stripper pole.

First, a little primer on ‘Pour It Up’. The video was actually co-directed by Rihanna. Her director begged off the project for reasons unknown at the last minute in September. Call me a cynic, but judging by the backlash, I would venture that he didn’t want his name attached to something so overtly in affirmation of raw female sexual agency. In many ways, I’m glad he did because the video would have been a very different one if a man had been given the lone director’s credit. Either way, in typical Rihanna fashion, she didn’t waste much time worrying about it. In the video, Riri showcases her own newly acquired pole dancing skills. Her Instagram evidences the fact that she’s been taking lessons from personal trainer Nicole “The Pole” Williams, who appears in the video herself and whose mind blowing audition tape for ‘Pour It Up’ was released as a teaser to the music video (it currently has nearly three million views on Youtube). This should be surprising to no one, as the lyrics of ‘Pour It Up’ are clearly about the strip club:

Strip clubs and dolla’ bills, I still got mo’ money

Patron shots can I get a refill, I still got mo’ money

4’o clock and we ain’t going home, cause I still got mo’ money

Money make the world go round, I still got mo’ money

Bands make your girl go down, I still got mo’ money

The fact that there are no men in this video stood out to me immediately. Upon watching the video and discussing it with my friend and porn star Loree Erickson, I realized Rihanna is assuming the positionality of both sex worker and consumer: the lyrics are about her showering strippers in money, but in the video we see her on the pole. Needless to say, the entire setup is very queer. And what’s more, the aerial performances in the music video are truly impressive: athletic, synchronized, artful, and somehow — despite outcry to the contrary — they are not demeaning to the women who performed them. Now, would I have liked to see a music video that actually showed what life is like for sex workers? Yes, the ‘Pour It Up’ video is a case study in fantasy, not realism. Am I thrilled about her comical devotion to money? Not really, but there are other things I like about the video. Namely, how Rihanna situates herself relative to sex workers as a woman in the rap game.

I’m a Rihanna apologist; I’ll admit as much up front if asked. Despite her more problematic moments, the best parts of ‘Pour It Up’ are an encapsulation of everything I love about her. In ‘Pour It Up’ Rihanna is paying homage to the long tradition of dancehall queens like Patra, Lady Saw, and Carlene whose musical stylings, aggressive in-your-face sexuality, and aesthetic she heavily borrows from (that blonde wig, for example). This tradition is about unapologetic women using what they have to get what they want — which is the bottom line of Rihanna’s video (and ultimately, her career). I choose to defend Rihanna particularly because the criticisms lodged at her are too often anti-Black, anti-woman, anti-Caribbean, and in this case, anti-sex work. So, let’s get into why the public’s reaction has been condemnatory instead of supportive.

Several prominent women have decided to take it upon themselves to call Rihanna out for behaviour they see as irresponsible. Sinead O’Connor, Annie Lennox, and others have come out decrying the fact that a) women musicians of the younger generation are being exploited for their sexually charged public personas, and b) that these young women are acting as poor role models to their even younger fans. There are several problematic assumptions at work here. First, it seems that it’s only female artists who are asked to serve, over and over again, as role models for young people. There is a clear double standard, and it almost always comes back to policing women’s sexuality in the public spotlight. It should be apparent, but female pop stars are not required to serve as anyone’s role model. In Rihanna’s case, she certainly did not communicate that serving as a role model was a priority for her. In fact, she has pretty much said the opposite. If you don’t want your kid listening to Rihanna, that’s on you. Plain and simple.

Second, the criticisms that young female musicians like Rihanna have been receiving about selling their sexualized image to the music industry are almost always whorephobic. It’s paternalistic and antifeminist to condemn what a woman chooses to do with her body, including the choice to engage in sex work (be it stripping or otherwise). It’s no mistake that the dollar bills Riri is throwing around in the video have her likeness on them. She is making the claim that, in some sense, she is selling her body like the strippers and dancers in her video. And she doesn’t have a problem with that. Far from it, she embraces it. Rihanna is the opposite of whorephobic. Of course, there is the legitimate question of whether she is appropriating experiences that are not her own for profit, but for the most part it is refreshing to see that Rihanna chooses to ally herself with strippers and dancers in a way that other rappers (including female ones) do not. Riri has no interest in being “one of the boys” because she’s down with the hoes. That is subversive; it’s also pro-queer and deeply feminist.

Unfortunately, her critics don’t see it that way. Dr. Helen Wright, a former president of the Girls’ School Association in England says of the ‘Pour It Up’ video that, “No matter how much people may talk about its artistic merit, it nonetheless objectifies and therefore demeans women by casting them in the mould of whore.” For Wright, all whores are victims — they necessarily lack agency. The language of exploitation that second wave feminists like Wright, O’Connor, and Lennox are using to be “critical” of Rihanna and even Miley Cyrus (and there have been comparisons) denies these women agency in their choice to be slutty. This critique is tired; slut shaming and whorephobia are antifeminist. And while there is a separate conversation to be had around race and appropriation in the case of Miley Cyrus, it seems that no one is actually interested in having that conversation. I honestly think most people are angry because Miley is testing the limits of her newfound, somewhat awkward sexuality in the public eye, and not because she is appropriating Black culture for cool points. She has the right to be slutty, however. She does not have the right to appropriate, not when Black bodies remain universally despised but white bodies performing Blackness are “edgy.” Certainly not when Rihanna will have a much harder time owning her sluttiness because of the ways in which patriarchy and racism overlap.

Finally, these critiques miss the much bigger point — that women are centered in ‘Pour It Up’. It is their talents, skills, and agency that takes the stage. Rarely do we see women looking as powerful as they do in the video for ‘Pour It Up’ and that’s a real shame. Women owning their bodies and declaring their sexual agency isn’t something we should be afraid of — even (or perhaps especially) if they are doing so on a stripper pole. And while it would also be wildly inaccurate to state that all women engaged in sex work are doing so because it’s personally empowering and what they want to be doing, I don’t think this video makes that claim. It’s time to leave the second wave behind; the most vitriolic of Riri’s critics are not young feminists but middle-aged women. They don’t speak for me or most of the women who actually listen to Rihanna’s music. And besides, it’s far from perfect, but the ‘Pour It Up’ music video was made under the direct creative control of a woman and there are actually, literally, no men in it. The male gaze is nonexistent here, or exists as an afterthought: do Rihanna’s critics know how rare that is in the music industry? 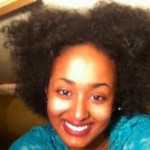 Muna Mire is an organizer, writer, and a Black girl from the future. A recent University of Toronto grad, she is on the editorial board of {Young}ist, a young people-powered media start up. You can find her freelance work at Rabble.ca, Huffington Post, and Bitch Media. Her interests include movement building, postcolonial literature, feminisms, and speaking back to The Man.