White People Talking to White People about Social Justice: Why “Book of Mormon” Just May Be Doing Something Right – The Feminist Wire

Home / Culture / White People Talking to White People about Social Justice: Why “Book of Mormon” Just May Be Doing Something Right

White People Talking to White People about Social Justice: Why “Book of Mormon” Just May Be Doing Something Right

Like Trey Parker and Matt Stone’s other collaboration, television’s Southpark, Broadway’s Book of Mormon is crass, potty-mouthed, and frequently offensive. But among all the things it does ‘wrong’ — it actually may be doing something right. 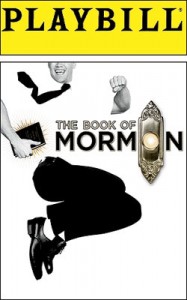 I know, I know. As a progressive woman of color, I should probably be horrified by the show. And believe me, there was some time before the intermission that I was. In fact, I had delayed seeing the award-winning musical for years out of concern for its politics. But a recent performance won me over.

As someone whose professional life is at the intersection of ‘narrative, health and social justice,’ I spend a lot of my time thinking about the ways that narratives are told, and whether those tellings support or undermine social justice. One of the issues I think deeply about is authorship — in other words, whose stories get told? Who gets to speak and who gets spoken for? With this question in mind, it would seem that Book of Mormon — a play written by two white men about white men ‘saving’ people of color —fails to tell a racially just tale.

Yet, don’t I and my activist colleagues get tired of ‘explaining’ race? Don’t we frequently declare that it is not our job to teach white people ‘all about’ racism and imperialism? If that’s so, what would an alternative narrative look like?

Book of Mormon begins with two white Mormon missionaries (one, a handsome, gosh-golly-shucks earnest narcissist and the other an Eric-Cartman-lookalike oddball pragmatist with a loose relationship with truth) being sent to a Northern Ugandan community to convert the locals to Mormonism. The narrative is told from their point of view; they are the play’s protagonists and we the audience are undoubtedly meant to identify with them. Not just that, but the Ugandan community they travel to is riddled with AIDS, poverty, and gender-injustice (including the threat of clitoridectomy and the belief that sex with a young virgin can ‘cure’ AIDS). Indeed, by the intermission, I was furious that the play’s people of color were seemingly passive plot points rather than active agents driving the story, furious at the ridiculous stereotypes about Africa being played out before my eyes.

Some thoughtful critiques, such as this one from Janice E. Simpson, similarly take the musical to task for its race politics.  In her April 2011 review, Simpson wrote,

The Ugandans whom the missionaries encounter are plagued by poverty, AIDS and an evil warlord who forcibly subjects women to circumcision…. Despite these woes, the villagers are portrayed as good-hearted, if simple-minded, people. One keeps referring to an old battered typewriter as her “texting machine.” Another stomps around talking about raping babies because he believes that doing so will rid him of HIV…It’s all played for can’t-you-take-a-joke laughs. But how funny can it be that AIDS has ravaged Africa, that warlords oppress their fellow citizens or that women and children are subjected to forced clitoridectomies?

While I would have agreed with Simpson’s argument had I left the performance at mid-point, by the end, I grew to realize that, while no means perfect, Book of Mormon also isn’t quite as simplistic as Simpson seems to suggest, or as I had initially believed. Yes, it’s horrifying to hear about a Ugandan man who wants to ‘rape babies’ to cure his AIDS. But the payoff comes in song lyrics when the villagers rightfully accuse the U.S. of ‘having a cure for AIDS’ (or at least quadruple therapies) but keeping it from the rest of the world, and saving it for a ‘latter day.’

Ultimately, the subversive strength of the play is this: it is a powerful, and (if ticket sales are anything to go by) effective example of white people talking to white people about anti-racist social justice. By this I don’t mean the musical pulls any punches, or talks about anti-racism in a way that ‘doesn’t offend’ white people. Rather, I believe that it engages in a sort of neo-liberal self-critique that can only come from a position of ‘insider.’

Consider that, through the trope of the mission-to-baptize-the-natives (which goes completely awry), the play is able to address the problems of neo-colonialism and what Teju Cole has called the White Savior Industrial Complex. This ‘white savior narrative’ is one espoused by all sorts of liberal folks, from U2’s Bono to  ‘I-am-African’ poster-posing celebrities to Pulizer Prize winner Nicholas Kristof.

Usually, it is progressives of color who must bring the white liberal community to task over this issue. Yet, here is an example of white people ‘schooling their own.’ Simply consider the lyrics to the song ‘I am Africa’ (performed by a chorus of prancing, over-the-top-earnest white Mormon missionaries), which declares,

I flew in here, and became one with

We are the, the only Africa

(The one and only Africa)

And the life we live is primitive

We are the deepest, darkest Africa!

(So deep and dark Africa)

We are the fields and fertile forests,

These (satirical) lyrics are deeply aware of neo-liberal attitudes which seek to swoop in and ‘save’ impoverished, dark-skinned people, as well as the tendency of Western do-gooders to consider ‘Africa’ one massive, undifferentiated place. It’s a critique many progressives of color have made time and again. Yet, how different the message when delivered by smiling, benign musical Mormons!

Similarly, I found the play’s treatment of clitoridectomy quite nuanced (which sounds insane in light of the fact that the musical at one point suggests that the clitoris is holy because Mormon leader Brigham Young had a clitoris on his face). First, the musical never uses the phrase ‘female genital mutilation,’ the seemingly preferred expression of Western feminists. Indeed, as African feminist activists including Dr. Nawal el-Saadwi have long maintained, vociferous Western condemnations of the practice only serve to make the job of local anti-genital-cutting activists more difficult, since they must then fight the assumption that they are part of a Western imperialist project rather than simply local people trying to change a cultural practice from within.

Second, by suggesting that clitoridectomy is something that is imposed by a hateful warlord rather than something that is inherently and homogenously ‘a part of local culture,’ Book of Mormon brings a far more complicated understanding to the practice than most Western narratives, which usually use genital cutting as an example of how ‘backward’ and ‘oppressive’ communities of the Global South are to women. Such narratives are consistent with what critic Gayatri Spivak has famously called the trope of ‘white men saving brown women from brown men,’ whereby ‘saving women’ of the Global South becomes a justification for at best, paternalistic policies and at worst, military aggression (i.e., consider that ‘saving women from the veil’ became a way for the U.S. government to justify the wars in Afghanistan and Iraq).

Finally, Book of Mormon does something deeply radical in its treatment of clitoridectomy — it portrays an African man as supporting his wife’s sexual autonomy rather than playing into the common Western narrative whereby men of the Global South uniformly oppress women. “My wife’s body belongs to her,” argues one Ugandan villager — and for this resistance, he is killed by the evil (pro-clitoridectomy) warlord. It’s a tiny moment, but to me, it is a vitally important one. Men of the Global South are too frequently portrayed in neo-liberal Western narratives as unilateral sexists — a phenomenon that deeply divides Western feminists from their global sisters, who then must chose between their gendered and racial alliances.

Yes, it’s problematic that the Ugandan community in Book of Mormon so wholeheartedly accepts Mormonism — but ultimately, the Ugandan villagers and young white missionaries must come together to form a new global community of their own. Cast off from the Mormon church, they must build this new community on their collective beliefs and experiences, integrating whites and Africans, missionaries and miscreants, women and warlords.

Of course, it is all, as the Ugandan villagers have always known, a metaphor. Mormonism for imperialism, Biblical stories for white savior complexes, emotional repression for lack of global vision.

For years, progressive communities of color have argued that the task to educate white people about racism should not fall on our shoulders. However imperfect, Book of Mormon is a step in the right direction: white people talking to white people about race, gender, and social justice in the age of neo-liberalism. And that, to me, is something to clap about. 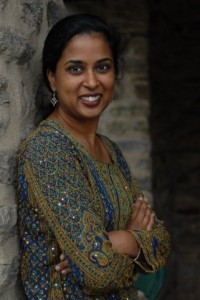 Originally trained in pediatrics and public health, Sayantani DasGupta, MD MPH, teaches at the Master’s Program in Narrative Medicine at Columbia University and the Graduate Program in Health Advocacy at Sarah Lawrence College. She is Co-Chair of the Columbia University Seminar on Narrative, Health and Social Justice and a faculty fellow at Columbia’s Center for the Study of Social Difference. Sayantani is the co-author of a book of Bengali folktales, the author of a memoir about her time at Johns Hopkins Medical School, and co-editor of an award winning collection of women’s illness narratives, Stories of Illness and Healing: Women Write their Bodies. She is widely anthologized and published in venues including Ms., JAMA, Literary Mama, The Lancet, and the recent Fifty Shades of Feminism (Little, Brown UK). Sayantani also writes for children and teens, and blogs for numerous online publications including Adios, Barbie, a pro-body image website. More about her work at www.sayantanidasgupta.com and http://storiesaregoodmedicine.blogspot.com. You can follow her ecclectic twitter feed @sayantani16, where she tweets about medical humanities, gender justice, parenting, pop culture, and anything else that tickles her fancy.