Your Feminism Ain’t Like Ours, Because We Are Raising Quvenzhané – The Feminist Wire

Home / Academia / Your Feminism Ain’t Like Ours, Because We Are Raising Quvenzhané

Your Feminism Ain’t Like Ours, Because We Are Raising Quvenzhané 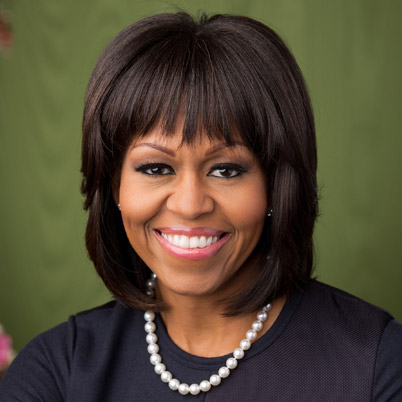 In Lonnae O’Neal Parker’s January 18 Washington Post article “Four Years Later, Feminists Split by Michelle Obama’s ‘Work’ as First Lady,” she includes a provocative quote from Leslie Morgan Steiner, author of  Mommy Wars: Stay-at-Home and Career Moms Face Off on TheirChoices, Their Lives, Their Families (2007).  Steiner asks, “Are fashion and body-toning tips all we can expect from one of the most highly educated First Ladies in history?”  Steiner then writes that she had “read enough bland dogma on home-grown vegetables and aerobic exercise to last [her] several lifetimes.”  But is this expectation skewed by the lens of a second wave feminism that, for the most part, enjoyed the political clout of its Black sisters without giving them the voice and power to address the additional impact of racism?

Rebecca Walker, who writes about culture, identity and motherhood, touched on this in her response. She notes that her mother, Pulitzer-Prize winning author Alice Walker, told her of white female writers: “We read them, but really, they do not read us.”  Additionally, she adds, “That feminist notion of being on the same team is often absent when it comes to issues affecting women of color and their communities.” Walker, who is biracial, finds the intense questioning of the first lady’s choices “tedious.”  She asks, do we really think “that [Michelle Obama] would have more power as a hospital administrator than she would as first lady?”

I agree.  Mrs. Obama has more influence in the public sphere than in the private sector.  White women would understand this if they read Black feminism.  And in a society infinitely more comfortable with the Black maid/slave/nanny raising white children instead of her own, the choice for a Black woman to focus on her family is not some kind of reversal; it’s an important assertion of value, part of a Black feminism that white women historically have never understood or supported.

This semester I am teaching Black Feminist Thought.  My syllabus includes Angela Davis, Michele Wallace, Audre Lorde, Psyche Forson-Williams, Gloria Hull, Patricia Bell Scott, Barbara Smith, Patricia Hill Collins, Patricia Williams, Beverly Guy Sheftall, Paula Giddings, Anne duCille, Adrienne Davis, Cathy J. Cohen, Evelyn M. Hammonds, Joy James, Stanlie M. James, Carol Boyce Davies, Cheryl A. Wall, and the late great June Jordan.  This list isn’t exhaustive, but even my students who are majoring in Women’s, Gender, and Sexuality Studies are unfamiliar with these luminaries.  If white feminists were familiar with these texts, they might understand that Black women have been able to define our own feminism within the context of U.S. racism for two hundred years.  People think the “Mommy Wars” started in the 1970s when white women entered the pink-collar work force, but white women like Susan B. Anthony have been ridiculing Black women like Ida B Wells-Barnett for choosing Black men and raising their children since the 19th Century.

In 1895, Wells married Ferdinand L. Barnett.  She set an early precedent as one of the first married American women to keep her own last name along with her husband’s.  The couple had four children: Charles, Herman, Ida, and Alfreda.  In her autobiography, A Divided Duty, Wells-Barnett describes the difficulty she had splitting her time between her family and her work.  She continued to work after the birth of her first child, traveling and bringing the infant Charles with her. Instead of supporting her, Susan B. Anthony said she seemed “distracted.”

Like Ida B. Wells-Barnett, my experience as a Black woman in the academy has been that my choice to be committed to supporting my Black husband and raising Black children has been interpreted as a “divided duty,” more than 100 years after Wells-Barnett blazed the trail. I entered the tenure-track 15 years ago when I was five months pregnant. I have taken three parental leaves, which were all met with resentment. This is not unusual, but what I am confident of is that if I had chosen to stay home, I would have faced as much hostility, if not more. America is comfortable with Black women raising white children (The Help, To Kill A Mockingbird, Clara’s Heart, I’ll Fly Away…need I go on?), but the minute we try to take care of our own, we’re reduced to “letting down the team,” which is what white feminist Linda Hirshman is claiming about Lady “O.” I’m confused. Just because I have five letters behind my name (Ph.D. and JD) and a substantive career does not mean I am, ever have been, or ever will be on their team. 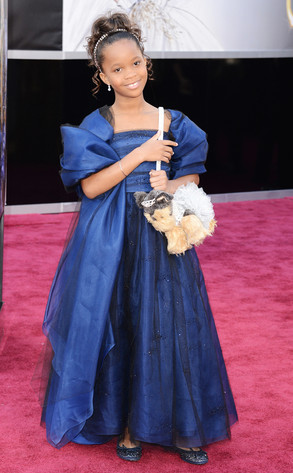 Why?  Because I am raising a daughter the same age as Quvenzhané Wallis, and it’s not the same as raising Dakota Fanning.  After receiving an Oscar nomination for her role in Beasts of the Southern Wild, Wallis, the youngest Best Actress nominee ever, landed the leading role in Sony Pictures/Overbrook Entertainment’s upcoming Annie.  Despite this, as many people know, The Onion degraded her childhood  by calling her a “cunt.”   This is where there is a divide between white Moms and “Mocha Moms.”  Leslie Morgan Steiner is not raising Quvenzhané, but we are.

Recently, Steiner was on Michele Martin’s “Tell Me More” with the founders of Mocha Moms, a support group for mothers of color who have chosen not to work full-time outside of the home in order to devote more time to their families and communities.  While many of their members have eliminated employment altogether, others work part-time, flex-time, night shifts, have home-based businesses, consult or freelance from home or have chosen alternative, less demanding career paths so that they are more available to their families.  The goal of Mocha Moms is to support the decisions made by its members.  They will never pass judgment on mothers who choose to make or are forced to make different decisions for their families.  Mocha Moms welcomes people of all religions, races, educational backgrounds and income levels.  While the exchange between Steiner and the Mocha Moms was amenable (no interjections about the invalidity of choosing family and motherhood in person), Steiner noted that her own mother went to work when she was 15.  Steiner’s take away message was that she would never be happy as a stay at home Mom, which is fine.  But that’s the point: it’s a choice, not a mandate.  Steiner is unable to acknowledge that Black women haven’t always been able to choose and that our choices, regardless of what they are, are rooted in different circumstances. 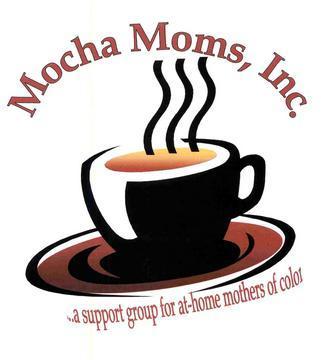 Although Mrs. Obama did not stay at home until being married to the President, she knows that she is not entirely different from the Black women who stay at home for other reasons.  She is also trying to protect her daughter from being “satired.”  When Malia was only 11, she was ridiculed  for wearing natural hair and a t-shirt promoting Peace.  Lady “O” knows that Malia is Quvenzhané, which is why she invited the Mocha Moms to the White House.  It’s an ethos Black feminists have understood all along; we need to support each other, value each other, and not degrade a sister whether she goes into the workforce or not. That’s what being on the same team is all about.

That said, the lessons of Black feminism can be taught to willing white students.  One of my own, Lucy Short, was inspired by the work of Brittney Cooper, and wrote:

In “A’n’t I A Lady?: Race Women, Michelle Obama, And The Ever-Expanding Democratic Imagination,” Brittney Cooper attests that Obama’s role as mother is expanding the existing definition of motherhood to include Black mothers. In promoting positive ideas about Black women’s ability to be mothers, Michelle Obama is still battling stereotypes about Black motherhood (50). By embodying an ideal mother and wife, Cooper asserts, “Michelle Obama has used her public platform to expand notions of womanhood and ladyhood and open the White House to communities of color” (41) […] In being recognized as not only a lady, but a “fashion icon outside the realm of fashion modeling…she is actively transforming beauty discourses among all Americans” (53). Thus, Cooper suggests that Obama’s adoption of Euro-centric ideals of femininity (i.e. ladyhood) can be considered feminist and progressive when viewed through a lens of race and history.

Encouraging young white women to learn about Black feminism is one of the best parts of my job, because they’re hungry for a different path than the one outlined by Steiner, one which doesn’t ridicule the path they take—career, family, or a blend of both.  It’s a road well-traveled by Black feminists.  We made that map.  And it’s up to the Black women of my generation to pass this map down, teaching the daughters of our contemporaries that the feminism they grew up with ain’t like ours, but it can be.  There’s always room for another on our team.
_________________________________________________________ 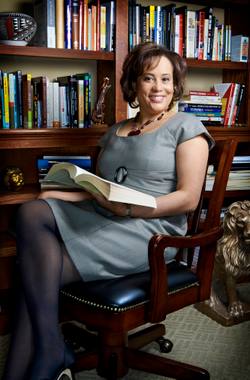 Duchess Harris is Associate Professor and Director of American Studies at Macalester College, where she is also an affiliate in the Department of Women’s, Gender, and Sexuality Studies.  She earned a PhD in American Studies with a minor in Feminist Studies from the University of Minnesota, and recently earned a JD in Law from the William Mitchell College of Law.  Professor Harris authored Black Feminist Politics from Kennedy to Clinton (Palgrave Macmillan, 2009) and its second edition, Black Feminist Politics from Kennedy to Obama (Palgrave Macmillan, 2011).  She has also published in Touro Law Center’s Journal of Race, Gender, and Ethnicity, JENdA: A Journal of Culture and African Women Studies, The Scholar and Feminist Online, Womanist, Theory and Research, and Sisters in the Struggle: African-American Women in the Civil Rights-Black Power Movement, among other texts.  Professor Harris is the founder of Voices from the Gaps, a member of the Shirley Chisholm Presidential Accountability Commission, and serves on the Board of Directors for the Minnesota Women’s Foundation and the Model Cities Family Development Center in Minnesota.