The Hooferman – The Feminist Wire

I started believing in the Hooferman the night Boy pulled the rope from the old canal—it lifted from the dirt inches at a time—until a hoof and leg appeared at the end. Boy hollered as loud as my cousin Wendell and I. We all ran from the creosotes and smoke trees to the streetlight across the road. The rope and leg didn’t move. The bushes were still. Boy walked over, cool-like, grabbed the rope and drug it back. The hoof scraped the asphalt. We huddled, inspecting it—it was boney and dry-looking. It smelled salty. I thought it was a horse leg, but didn’t know why it’d been in the canal, or on a rope. Wendell bet it was a goat leg, but none of us had ever seen a goat with a leg that big. Boy said he knew what it was. Hooferman! he screamed. He swung the rope over his head, letting the leg fly.

We watched him, whirling in circles, flinging that awful leg. Blue-brown light slid across his mouth and teeth. Boy was crazy. Everyone knew it. He had no parents except for two even crazier uncles. We left him under the streetlight, swinging at nighthawks.

We went to Wendell’s. There was a party in his backyard. Boy’s uncles brought a white hobo with them. I’d seen the hobo before at the river, down by the bridge. He had a dog he said was part wolf. The dog wouldn’t let anyone near him, not even Boy’s uncles. The backyard filled with people and music. Wendell’s auntie set up her drum set outside the washroom and played along with the stereo. She closed her eyes and pushed her face toward the sky, hair whipping in every direction. When I stood too close, I lost track of my heartbeat in all the drumming.

Wendell and I ate hotdogs and argued about Hooferman. He’s not real, I said. My dad saw him, Wendell said. My dad said only drunks see him, I replied, and it’s really the devil they see. Wendell told me, Your dad can’t see him because he’s white. My dad is Spanish, but I was hungry so I didn’t argue. Plus, I heard trouble in the front yard.

One uncle had led the wolf-dog away with hotdog buns and potato chips. The hobo should’ve left then. I wanted to tell him to go. Where’s my dog? he asked Wendell’s mom. She looked away. Wendell’s auntie started drumming again.

He should’ve left before the uncles shoved him into the gravel. Before they kicked him. Before one found a rock the size of a cantaloupe and smashed it down on his head. Smash. Smash. My heart fell in time. I dropped my hotdog in the dirt and ran. Wendell yelled, Don’t call the cops.

I ran home like something was behind me. I passed Boy, walking toward Wendell’s, twirling the leg in the air. Hooferman! he cried out. And I knew he was right.

Credits: This story was first published by the Bellingham Review and won the Tobias Wolff Award for Fiction. 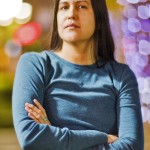 Natalie Diaz was born and raised in the Fort Mojave Indian Village in Needles, California. She is Mojave and an enrolled member of the Gila River Indian Tribe. She was part of the Old Dominion Lady Monarch basketball team that made it to the NCAA Championship game in 1997. After playing professional basketball in Europe and Asia for several years, Diaz returned to Old Dominion and completed a double-MFA in poetry and fiction. Her first poetry collection, When My Brother Was an Aztec, was published by Copper Canyon Press in April of 2012. Her work has been published or is forthcoming in The Iowa Review, North American Review, Prairie Schooner, Black Renaissance Noire, Crab Orchard Review, and others. She is a 2012 Bread Loaf Scholar and recipient of a Lannan Residency in Marfa, TX. Diaz currently lives in Mohave Valley, Arizona, and directs the Fort Mojave Language Recovery Program, working with the last remaining speakers at Fort Mojave to teach and revitalize the Mojave language.

Related ItemsCultureViolence
← Previous Story Louder Than the Dark: Toward an Acoustics of Suffering
Next Story → Riding Past the Limits of Coalition Politics