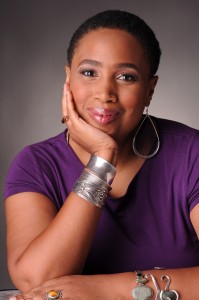 Aishah Shahidah Simmons is an an award-winning African-American feminist lesbian independent documentary filmmaker, television and radio producer, published writer, international lecturer, and activist based in Philadelphia, PA. An incest and rape survivor, she is the producer, writer, and director of the internationally acclaimed, award-winning, groundbreaking feature film NO! The Rape Documentary, which unveils the reality of rape, other forms of sexual violence and healing in African-American communities. NO! also explores how rape is used as a weapon of homophobia. She is presently in post-production on Liberation from Within about the first 10-day Vipassana Meditation course, as taught by S.N. Goenka, held in India, for people of African heritage worldwide. Her previously completed videos Silence…Broken and In My Father’s House are her personal exploration of the impact of the intersections of race, gender, sexuality, and rape on her Black feminist lesbian journey. Her writings on cinematic activism, gender-based violence, queer identity, and spirituality from an AfroLez®femcentric perspective are featured in several anthologies, journals, and blogs. Aishah facilitates workshops, teaches classes, and lectures extensively throughout North America and internationally. NOtheRapeDocumentary.org.