The Golden Handcuffs of Gay Rights: How Pinkwashing Distorts both LGBTIQ and Anti-Occupation Activism – The Feminist Wire

Home / Culture / The Golden Handcuffs of Gay Rights: How Pinkwashing Distorts both LGBTIQ and Anti-Occupation Activism

The Golden Handcuffs of Gay Rights: How Pinkwashing Distorts both LGBTIQ and Anti-Occupation Activism 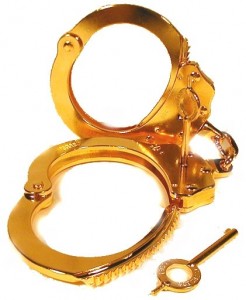 Israeli democracy, through its promotion of LGBT rights, offers golden handcuffs—a beautiful gift that comes with control—to Israeli queers. At a lecture in Tel Aviv at the Women’s Peace Coalition, I heard the strain in the voices of queer Israeli activists who are chafing under Israeli’s progressive gay rights record.  One activist stated: “Apparently we have won all our rights and it’s like we should be grateful and keep silent about the injustices of the Occupation. LGBT rights in Israel are conditional rights; we cannot openly support the Boycotts, Divestment and Sanctions (BDS) movement without legal repercussions.” (See for example, The Jerusalem Post article on the “Boycott Bill”.) That’s right, progressive Israeli queer organizing has now been criminalized, if it in any way supports the BDS movement. How is that for irony? These activists also report that trans and gender-non-confirming queers were not welcome in this new version of the proper “homonationalist” Israeli citizen. Sexual “liberation” for the privileged few comes in exchange for limits on political freedom for all.

More specifically in terms of Palestinian queers, the LGBT rights project itself relies on the impossibility/absence/non-recognition of a proper Palestinian queer subject except within the purview of the Israeli state itself. As a lawyer at the Palestinian human rights organization Adalah explained to us, LGBT laws in Israel are liberal because it is considered an “internal” affair. Yet the ironies proliferate. On January 11th, on the same day as Tel Aviv’s dubious honor as the “world’s best gay city” was announced, an amendment to Israel’s citizenship laws that prohibits the unification of West Bank Palestinians with their spouses in Israel was upheld by the High Court of Justice.  Add to this the passage of “social suitability” laws, and the attempted regulation of sexual activities between foreign laborers and Israeli Jews, and it becomes patently clear that LGBT liberation also works to distract attention from intense forms of (hetero)sexual regulation, regulation that seeks to constrict the sexual and familial activities of all bodies not deemed suitable for the Israeli body politic.

Golden handcuffs limit the resistance of gay Israeli citizens benefiting the most directly from legal and cultural forms of sexual freedom; the trade off of freedom for suppression is even more complex for Palestinians living in Israel. But what of the queer Palestinians living under Occupation? If Israel is so convinced of the grandeur of gay Tel Aviv, perhaps it should make it possible for queer Palestinians to actually reach this beacon of modernity and freedom? Pinkwashing only makes sense through an erasure of the spatial logics of control of the Occupation and the intricate and even intimate system of apartheid replete with a dizzying array of locational obstacles to Palestinian mobility. That queer Palestinian activists in Ramallah cannot travel to Haifa, Jersusalem, or Gaza to meet fellow Palestinian activists seems to be one of the most obvious ways the Israeli occupation delimits—no, prohibits– the possibilities for the flourishing of queer communities and organizing that Israelis have enjoyed without hassle.

Yet instead of understanding access to mobility and congregation as constitutive of queer identity and community, pinkwashing reinforces ideologies of the clash of cultures and the “cultural difference” of Palestinian homophobia rather than recognizing the constraining and suffocating spatial and economic effects of apartheid. Queer Palestinians are no more mobile than other Palestinians; the golden handcuffs are more like the concrete and steel of the walls and roads of spatial apartheid for them. During the course of our 7 day LGBTIQ delegation, which was the first of its kind to the West Bank, we were part of countless discussions about various routes of travel and how many and what kinds of checkpoints would be encountered on a chosen route; how easy or difficult would they be to traverse; what kinds of delays could be anticipated.  Our visiting delegation of U.S. citizens experienced the bodily and logistical discombobulation of always needing to be hyperaware of how one is transiting through the ever-shifting boundaries between Israel and the West Bank. Questions about the treatment of homosexuals in the West Bank or the Gaza Strip fail to take into account the constant and omnipresent restrictions on mobility, contact, and organizing necessary to build any kind of queer presence and politics.  What becomes clear is that the purported concern for the status of homosexuals in the West bank and the Gaza Strip is being used to shield the Occupation from direct culpability in suppressing, indeed endangering, those very homosexuals. 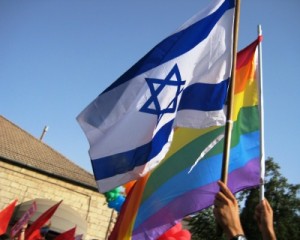 For the constrained yet thriving political platform of the Palestinian Queers for Boycott, Divestment, and Sanctions, and groups such as Al-Qaws for Sexual & Gender Diversity in Palestinian Society and Aswat, queer organizing is anti-Occupation organizing; likewise, anti-Occupation work is queer organizing. Palestinian Queers for BDS  members point out that it is irrelevant whether Palestinian society is homophobic or not, and that the question of homophobia within Palestinian society has nothing to do with the fact that the Occupation must end. The Occupation is in this context quite simply a queer issue.  Al-Qaws makes it clear that its primary work is about ending the occupation, not about reifying a homosexual identity that mirrors an “Israeli” or “Western” self-serving form of sexual freedom. We might do well, then, to realize that pinkwashing is what Michel Foucault called an “incitement to discourse,” a call and response circuit that produces the identity that is purportedly not there.

Refusing the liberal response to this incitement to discourse—a contemporary version of “we’re here, we’re queer, get used to it”– Palestinian Queers for BDS challenges a single axis identity politics while remaining fully aware of the trap of nationalism. Their organizing strategies suggest that one might not want to respond to pinkwashing as (primarily or only) queers, since such a response reinforces the logic of pinkwashing that isolates queer from other identities. Nor is pinkwashing a queer issue per se, or even one that uses queers in specific to other state ends. Pinkwashing is thus not about sexual identity at all in this regard, but rather a powerful manifestation of the regulation of identity in an increasingly homonationalist world—a world that evaluates nationhood on the basis of the treatment of its homosexuals–that works to justify the Occupation.

The challenge, then, for Palestinian Queers for BDS, and for those of us who are progressive activists, queer or not, is to not allow the liberal or establishment gays in Euro-America (who are the primary target of pinkwashing) to redirect the script of anti-pinkwashing activism away from this radical approach. Failing this, as Maya Mikdashi has so brilliantly articulated, the rewriting of a radical Palestinian queer politics by a liberal Euro-American queer politics would indeed be a further entrenchment of homonationalism.

Pinkwashing has become a commonly used tag for the cynical promotion of LGBT bodies as representative of Israeli democracy. As its use as a shorthand proliferates, it must be situated within its wider geopolitical context. That is to say, pinkwashing works because both history and global international relations matter. So while it is crucial to challenge the Israeli state, it must be done in a manner that acknowledges the range of complicit actors. Building on theoretical points first articulated in my 2007 book, Terrorist Assemblages, I contend it is crucial to keep in mind that pinkwashing works because of (at least) these reasons: 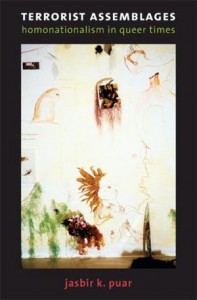 1. The history of settler colonial violence that has used the figures of women and children (The Woman Question) and now the homosexual to obfuscate its violence. Pinkwashing is only one more justification for imperial/racial/national violence that has a long history preceding it.

2. The proliferation of global Islamophobia engendered by the war on terror (as well as forms of Islamophobia that pre-date September 11th).

3. A neoliberal accommodationist economic structure that engenders the niche marketing of various ethnic and minoritized groups that has itself normalized the production of a gay and lesbian tourism industry built on the discursive distinction between gay friendly and not-gay friendly destinations.

4. The gay and lesbian human rights industry which continues to proliferate Euro-American constructs of identity, (not to mention the notion of a sexual identity itself), that privilege identity politics, “coming out,” public visibility, and legislative measures as the dominant barometers of social progress,

5. The homonationalist history of Israel, or the rise of LGBT rights in Israel that parallels the concomitant increasing segregation of Palestinian populations, especially post-Oslo.

6. The financial, military, affective, and ideological entwinement of US and Israeli settler colonialisms. The U.S. and Israel are the largest benefactors of homonationalism, as it operates on three scalar registers: internal, territorial, and global. Moreover, pinkwashing is to a large extent directed towards the US, Israel’s greatest financial supporter internationally, and more generally to Euro-American gays who have the political capital and financial resources to invest in Israel.

Some might say that golden handcuffs and other forms of control and trade-offs for rights for some over others can also work within Palestinian resistance. Let me tell you why homonationalism does not describe organizing under the BDS movement. I had the honor of meeting Omar Barghouti at a talk I gave at Birzeit University in Ramallah after the delegation ended. “I came to hear you and to understand more about homonationalism,” he told me. I mentioned that queer Israeli activists are wondering if  Palestinian Queers for BDS is being “used” by the BDS movement in the same way that they are being used by pinkwashing. “Is the BDS movement embracing queer Palestinians?,” they wanted to know.  While Barghouti elaborated to me the dynamism of the BDS movement and its short-term changes and long-term vision, I marveled at the inadequacies of these questions themselves. From what I learned on this delegation,  Palestinian Queers for BDS is not a liberal project that is demanding acceptance, tolerance, or inclusion within a “nationalist” movement. Rather, through foregrounding the Occupation as its primary site of struggle, PQBDS is slowly, strategically and carefully insisting upon and creating systemic and thorough changes in the terms of Palestinian society itself. Golden handcuffs—no matter how offered or how shiny—will simply not do. 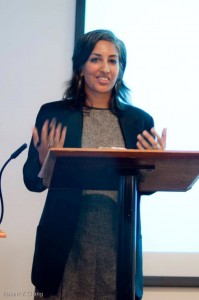 Jasbir Puar is Associate Professor of Women’s & Gender Studies at Rutgers University.  Her research interests include gender, sexuality, globalization; postcolonial and diaspora studies; South Asian cultural studies; and theories of assemblage and affect. She is the author of Terrorist Assemblages: Homonationalism in Queer Times (Duke University Press 2007), which won the 2007 Cultural Studies Book Award from the Association for Asian American Studies. Professor Puar has also authored numerous articles that appear in Gender, Place, and Culture, Social Text, Radical History Review, Antipode: A Radical Journal of Geography, Signs: Journal of Women in Culture and Society, and Feminist Legal Studies. Her edited volumes include a special issue of GLQ titled, “Queer Tourism: Geographies of Globalization” and co-edited a volume of Society and Space titled “Sexuality and Space”. Most recently she edited, with Julie Livingston, a special issue of Social Text on “Interspecies.” (Spring 2011).

She is currently working on a new book on queer disability studies and theories of affect and assemblage titled Affective Politics: States of Capacity and Debility. Her most recent publications from this project are “Prognosis Time: Towards a Geopolitics of Affect, Debility, and Capacity” in Women and Performance: A Journal of Feminist Theory (vol 19, no.2, July 2009) and “The Cost of Getting Better: Suicide, Sensation, Switchpoints,” in GLQ: A Journal of Gay and Lesbian Studies (Winter 2011).

Professor Puar is also a contributor to the Guardian and The Huffington Post, as well as Bully Bloggers (bullybloggers.com) and Oh! Industry (ohindustry.com). Her op-eds have focused on “pinkwashing” in gay and lesbian activism, queer Islamophobia, and the limits and possibilities of the It Gets Better campaign.